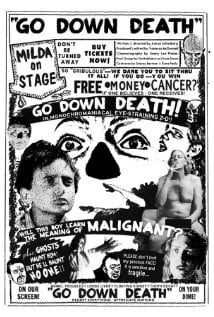 [xrr rating=1.5/5]Director Aaron Schimberg and his wife, producer Vanessa McDonnell, made Go Down Death on a shoestring budget with amateur actors in an abandoned paint factory in Brooklyn. The movie premiered at a Brooklyn repertory theater that was fashioned out of a bodega. I would love to tell readers to go out and support this uber-independent, grass-roots film, and I have to give props to cinematographer Jimmy Lee Phelan for the 16mm black & white photography that sculpts gorgeous images out of chaos. Nevertheless, I must warn the reader that this beautiful film is at times a nearly unwatchable failure to communicate.

The title card that opens Go Down Death explains that the following vignettes are based on the work of a folklorist with the unlikely name of Jonathan Mallory Sinus. This immediately puts you in the film’s self-conscious and affected mind-set. That’s before you even meet the characters, which include an amputee, a teen-aged gravedigger, a bulge-eyed poker player and a tone-deaf cabaret singer, misfits who live in and around a nonsensical brothel in some unnamed war-torn land.

The invented myth and black and white 16mm aesthetic is right out of Guy Maddin territory, though the director also claims to be influenced by everyone from Thelonious Monk to Ozu to The Da Vinci Code. In interviews, Schimberg expresses surprise at critics who figure the his approach is a deliberately obscure provocation. He told Indiewire, “I want to move you, not provoke you. And if you’re unmoved, I apologize.” Yet Schimberg admitted to Bomb magazine that he can watch his own movie and laugh, but at other times the same scene will make him sad. “I wanted everybody in the film looking a little bit confused and lost. I was encouraging that.”

No wonder his ideas don’t come across. I’m not sure I would appreciate Schimberg’s ideas even if they were legible, a word that Schimberg practically derides as a bourgeois signifier elsewhere in the Bomb interview. A layered work of art can support varied meanings, and surrealism is by definition more open to interpretation. The best surrealists use seemingly incongruent images to tap the potent reservoirs of the subconscious. But whatever symbols Schimberg uses here are too personal to elicit a surrealist charge. This may be a metaphor for bad communication skills, but if so, it’s a metaphor borne of flawed process, not content.

It’s obvious from the end product that the director gave his actors little guidance, but a few performances stand out despite his best efforts. Child actor Rayvin Disla’s teenaged gravedigger manages to convey stability and determination in a deliberately confusing environment, so much so that you wish he had run the show. Sammy Mena’s weathered, disfigured face is enough to make the poker player Rosenthal come to life, his bulging eyes a metaphor for the director’s distortion of cinematic language.

Schimberg eschews character arcs, protagonists and story, leaving the viewer only the striking visuals, but it’s not enough. Guy Maddin fashioned a credible, compelling myth in films like Tales from the Gimli Hospital, which looked like a forgotten RKO picture from another planet. But Schimberg’s film is more interesting on paper and in stills than as a moving image. One of the film’s strongest set pieces is a forest that is entirely fake, but that establishes a dreamlike reality that’s the perfect setting for a flight of fancy. Schimberg provides an unsettling backdrop that should be the envy of directors with much bigger budgets. But he refuses to give structure to the fever dream that inspired his script.