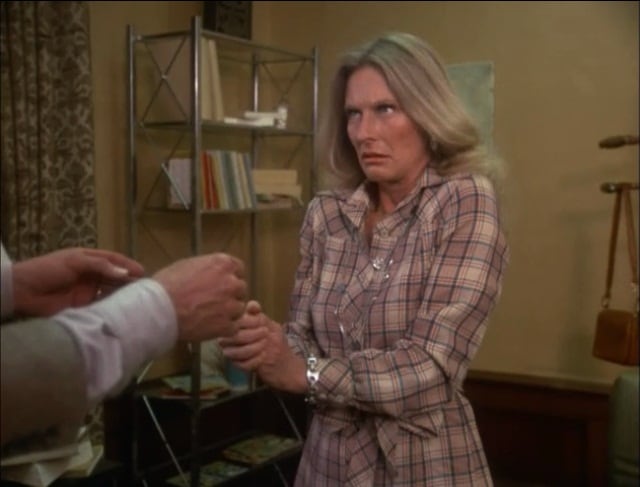 History has not been kind to TV Movies of the Week, which we assume are no more than low-budget quickies. The appearance of vintage TV movies on Netflix Instant is less a sign of a curator’s revisionist touch than of a cheap and easy license for forgotten product quickly thrown together to capitalize on a hot topic. But the generation who grew up with movies like The Loneliest Runner (bedwetting) and Brian’s Song (cancer) – in other words, consumers like me – look at these movies through the fond prism of nostalgia. I don’t expect these to be any good. I’m making my way through the TV movies available on Netflix, YouTube and other services, and I’ve seen a lot of duds in the process. But an efficient approach to storytelling can emerge from limited production values and formulaic scripts, and it’s natural that a journeyman director could use the template to make something that may not be art, but is superior craft. The 1975 ABC Movie of The Week Someone I Touched is one of these forgotten gems.

Cloris Leachman sings the wistful theme song over the opening credits, in which we see Carrie (Glynnis O’Connor) and her friends playing volleyball on a Los Angeles beach. It’s the picture of idyllic Southern California youth that the Beach Boys made an American myth. But an intruder approaches their youthful reverie. The camera cuts from golden sands to a parking lot, where County Health Official Frank Berlin (Dirty Harry madman Andrew Robinson) pulls up in his gas-guzzler to bear news to one unlucky beach bum.

The lyrics to “Someone I Touched” are hilarious: “There were no hopes no ties/Only goodbyes/Yes everything dies.” This sincere ballad soon leads to what seems like little more than a dramatized public service announcement. Berlin (named for the decadence he polices?) finds Carrie. The shooting script calls for Robinson to deliver his news in a manner that is “low key, quiet, reassuring.” But there is no easy way to say this: “I’m afraid you’ve got yourself a case of V.D.”

The opening scene of Someone I Touched immediately delivers on its promise of camp value. But the movie doesn’t pull out all the melodramatic soap opera stops you’d expect from the tabloid subject matter. Simple visual rhythms and a restrained score lead the film instead to a stark and effective look at contemporary mores, and at ordinary life. 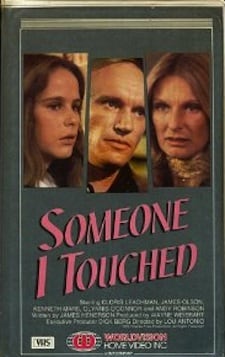 Carrie works as a supermarket cashier. I love supermarket scenes in old movies, crash courses in the fashion and design sense of an era. And of course you marvel at how much prices have gone up since then. It wasn’t that long ago that they were cramped affairs, mountainous displays of canned vegetables on special taking up precious floor space and creating a claustrophobic shopping experience. An L.A. supermarket is a nostalgic treasure, and the setting for one of the movie’s strongest scenes. It’s a scene with little dialogue, scored by the clatter and punch of old cash registers and idle chatter and punctuated now and then by a P.A. announcing a special on cantaloupe. Balding, middle-aged husband Sam (James Olson) approaches the checkout bank when he spots Carrie at another register, and subtly turns to another aisle. Carrie notices Sam, and they avoid each other’s looks in a series of alternating shots that could be from a textbook on basic shot rhythm. When Sam leaves, the rhythm changes. The camera follows Carrie as she closes her register and walks to her coworkers to find out the name of the man who had just left.

It’s a tense, efficient way to tell the story of an unlikely and anonymous assignation that ended in disease.Someone I Touched isn’t exactly late period Bergman, but it’s a startling look at the casual relationships of ’70s America. Carrie shares a pair of great domestic scenes with her mother Enid (played by O’Connor’s own mother, Lenka Peterson). They exchange mother-daughter banter of disappointment and frustration when the camera turns to show the pair in a mirror. It’s the kind of visual gesture that launched a hundred soap opera moments and TV-movie confrontations, but it’s a cliché because it works: the embittered pair is unable to face each other directly and stare into reflections of themselves in order to avoid the uncomfortable nakedness of real communication. O’Connor isn’t as good an actor as her mother is, but it doesn’t matter – the camera, and her mother, neatly build tension for her.

Director Lou Antonio began his career as an actor (see him in Cool Hand Luke) but ended up behind the camera for dozens of TV movies and episodes. He treats the sensationalistic script with more dignity than it probably deserves. But he also lies for the sake of a plot twist. The movie’s unlikely couplings lead to unlikely culprits: Sam thinks Carrie gave him V.D. and that he passed it on to his wife Laura (Leachman), but the answer is not so simple. An early scene between the pair that launched this ship of contagion (okay, spoiler: Leachman got it from Kenneth Mars – go figure!) may have held a clue to the truth, but the scene is played without any signs of tension. Ironically, it feels like a cheat. There are giggle-ready moments in Someone I Touched, but Antonio and his actors develop an uncomfortable tension that’s worth taking seriously. The movie ends with a revelation and another scene at the supermarket, which closes the loop on a story forged by an American lifestyle driven by consumerism and commodities, which suggests another, darker title: Someone I Bought.