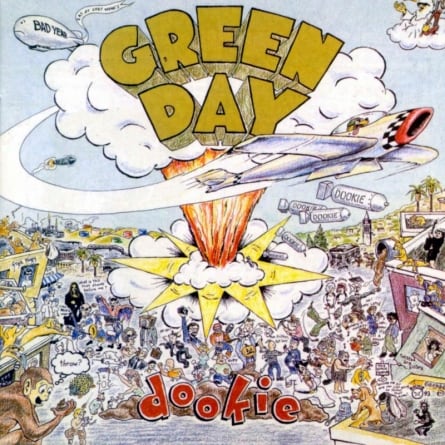 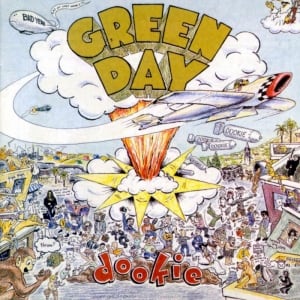 If you were a white, suburban male between the ages of 13 and 16 in 1994, there’s a good chance that Dookie served as the soundtrack to your angst-ridden, hormonally-driven teenage life in the ‘burbs. And if you weren’t, for the sake of this article, pretend that you were. You remember how you were then: at war with the parents who kept you well fed and put a roof over your head, pissed off at the world, days on end spent with a tight grasp on your penis. You were a comfortable kid, to paraphrase a certain baritone singer, loaded with all manner of material comforts and maybe even attending a posh private school where you knew that even if you bombed out, your ass would be covered. In short, life was miserable.

And Billie Joe Armstrong and those other two guys knew exactly how you felt. “When masturbation’s lost its fun/ You’re fuckin’ lonely.” Hell yeah! “Welcome to Paradise…” damn right: was there anything more romantic than living on your own – or at least the idea of it – even if it was in some shitbox hovel? “I declare I don’t care no more.” Your entire nihilistic, upper middle class ethos summarized in one simple opening line. You became Green Day’s core audience: after all, all those reactionary Kerplunk punk “purists” who cried sellout after Dookie started to sell a bazillion copies aren’t the ones who propelled the band into the stratosphere.

But how does Dookie sound to your on-the-wrong-side-of-30 ears? On paper, its lyrics and their concerns (or, less charitably, complaints) sometimes now come across as juvenile and naïve. I’m willing to bet that those of us who were teenagers when Dookie was first released now have a hard time finding relevance in many of the album’s lyrics; at a minimum, the album doesn’t pack the same type of punch it did back in 1994. At times these lines read as excessively whiny: your adult self knows now that at some point, you gotta get your ass up off the mat and do something. Chances are also pretty good that you’re no longer one of those melodramatic fools who exists in a disgruntled state of perpetual boredom and whose idea of air quality is measured in terms of how thick the pot smoke is. And that romance about being poor? By now you’ve discovered that such romance is overrated and that David Berman had in right in “Buckingham Rabbit”: you don’t wanna look poor anymore either.

But Dookie’s lyrics aren’t meant to be read as poetry, and it’s the album’s instrumentation and Armstrong’s vocal delivery that mask its occasional lyrical shortcomings. The bassline in “Longview” rightly remains legendary, and for that matter so does the song’s video: anyone who watched MTV in the mid-1990s likely has that sequence of Armstrong knifing the shit out of that couch seared into memory. Today it’s a relic from a time when music videos actually had cultural relevance. In addition, almost every song is as effective a distillation of “punk” as any mainstream band from the 1990s could muster – even the non-singles that are usually overlooked – proving that even 20 years later that simple formula of a few guys creating streamlined rock will never go out of style. For his part, Armstrong rants and raves his way through the songs like any self-respecting punk frontman should, at times uncomfortably convincing in how he embodies the album’s preoccupation with mental instability. Quite simply, the music has aged gracefully, which is more than what can be said of many punk-inspired bands that both preceded and followed Green Day.

That Green Day’s influence gave rise to such legions of terrible pop-punk imitators is also regrettable, but not the band’s fault, and if anything, only confirms how omnipresent Dookie was in 1994 and remains to this day. It’s still a solid album even after all these years, though I’m sure many of its original listeners whose worries now revolve around mortgages and children have outgrown it. But that’s okay: someday those very children will discover it, or have their own generation’s equivalent of Dookie that expresses the same dissatisfied feelings.