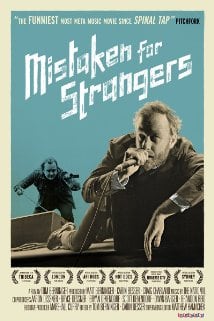 [xrr rating=3.0/5]Tom Berninger is an aspiring filmmaker who isn’t a very good filmmaker. He is also the younger brother of Matt Berninger, the very talented lead singer of the band the National. In his film Mistaken for Strangers, Tom creates a funny and moving portrait of the band that does away with the glossy, annoying trappings of most rock docs. Unfortunately, Tom doesn’t know when to get the hell out of the way, and that the ticket-buying public is more interested in his brother than his relationship with his brother.

Matt hires Tom to work as a roadie during one of the band’s tours, giving the filmmaker access to the tour bus, backstage and the dressing room. Tom, however, is more interested in making movies than doing his job. The first section of the film is one series of failures after another. Once he is fired from the tour, Tom explores his relationship with his brother, turning the film into a movie about self-actualization, not about the National.

Two pairs of brothers back Matt to make up the National, but the other four musicians are pushed into the background as Tom attempts to connect with his older sibling. While it’s cool to see folks like Werner Herzog and Annie Clark hobnobbing with the National backstage, we see much more of Tom, a balding, pudgy metalhead who still lives at home with his parents. Sure, Tom is witlessly funny and some of his peccadilloes, such as missing the tour bus, evoke laughs. He is also a shameless narcissist who uses the National’s success to make what is essentially a film about his own insecurities.

Mistaken for Strangers has absolutely no value if you aren’t a fan of the National. However, if the titles Boxer and High Violet mean something to you, than Mistaken for Strangers has some genuine moments that make it worth seeking out. Matt Berninger comes across a down-to-earth, if somewhat insecure guy who has a vested interest in seeing his brother succeed. In the final portion of the film, Matt invites Tom to move into his Brooklyn home while he edits the movie.

Members of the National served as producers on the film, so they certainly had some creative control over its direction. With judicial trimming (aka cutting away many of the scenes where he dominates the frame), Mistaken for Strangers could have been an exceptional portrait not just of a band, but of the idea of brotherhood that fuels the venture. Most of the time it doesn’t go that way. At its worst, Mistaken for Strangers feels like a depressed guy riding his famous older sibling’s coattails in a vain attempt to make sense out of his life.