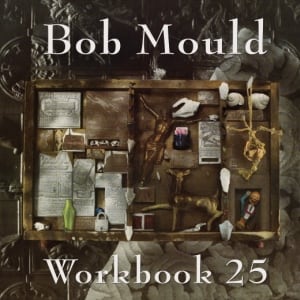 [xrr rating=4.0/5]A confession: I know little to nothing of Bob Mould, Hüsker Dü or Sugar. Workbook 25, the re-release of the musician’s debut solo album is the first of his prolific, storied career that I’ve given extensive attention to, but in retrospect, there is probably no better entry point for a new fan. Listening to Workbook 25 is not revelatory, precisely, but it does show the musical DNA that would become dominant traits for alternative rock of following generations. If anything, the album creates a sense of “oh, that’s where all this came from.”

Famously, Hüsker Dü broke up in acrimonious circumstances in 1988, after six albums that shaped hardcore punk and what would briefly be known as college rock, later dubbed alternative rock and more recently and even more vaguely, indie rock. Mould holed up in rural Minnesota, emerging with Workbook in 1989, having handled multiple instrumentation and production himself; there is no doubt that Workbook 25 (as the anniversary release is dubbed) is the sound of a man experiencing an immense creative rebirth. The opening track “Sunspots” alone demonstrates that; for one of the leading lights of the hardcore scene to begin his first solo album with a pastoral 2 minute instrumental can only be seen as a statement of purpose.

But Workbook 25 is somewhat deceptive in its opening gentleness. While the predominance of acoustic guitars is at odds with the electric ferocity of his previous band, this is not a mellow album. The second track “Wishing Well” is a roaring blast after the quiet of “Sunspots,” immediately charging into a dark headspace with “Wishing well, runs wet and dry/ I wish for things, I never had/ Surrounds and wells up in my eyes/ The screaming voice, it lies.” Much of Workbook follows in the same acidic tone; while the lush production and predominance of Jane Scarpantoni’s cello may have the surface elements of folk rock, the underlying emotions are overwhelmingly lacerating, self and otherwise. Tracks like the ominous “Poison Years” underscore this with lyrics like “At the end of this rope/ Rope at the end of the line/ I see you swing by your neck on a vine,” and the fallout of Hüsker Dü hangs heavily over the entire album. Only the album’s lone single “See a Little Light” doesn’t have an intense, foreboding atmosphere; instead, it’s a song almost entirely composed of hooks and Mould’s textured voice, even when the lyrics edge towards the uncertain.

Twenty-five years on, Workbook has to be listened to as an album and as a historical document. As the latter, it’s a vital link between American punk music and the more melodic approach of college rock in the 1990s (along the Replacement’s Tim, Mould’s erstwhile rivals in the Minneapolis scene). It’s not difficult to hear Nirvana’s use of a string section alongside raw rock emotion in their Unplugged album, or Justin Vernon’s famed transformation into Bon Iver via self-imposed isolation. But anachronistic musings aside, Workbook 25 also includes a live set from 1989, including most of the album (as well as a Richard and Linda Thompson cover and a handful of Hüsker Dü cuts), which in its own way is just as telling. Though the songs are not dramatically reworked from the studio versions, Mould rages on the live cuts, his voice frequently hoarse and snarling. Even though the songs might be theoretically a world away from his early work, the same spirit imbues them. Even a newcomer to Mould’s music could tell that.