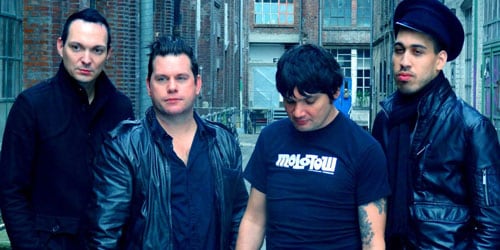 Contradictions are at the heart of what powers …And You Will Know Us by The Trail of Dead. They ambitiously create rich, concept-heavy post-rock albums that are executed with raw punk rock intensity. Their music spans from fragile, wispy psychedelic patterns to peaks of roaring chaos. But the biggest contrast is between the serious, focused tone they find in the studio and the unfiltered range of emotions they bring to the stage. This tour is all the more intriguing because it’s a brief pause before resuming work on a new album that’s scheduled for later this year. With their most recent release being 2012’s Lost Songs, they may have thought it would be hard to motivate a good turn out, so this tour reaches back to what is regarded as the band’s breakout album, Source Tags & Codes.

A small but dedicated fanbase did make it out for the Denver show, which was the last stop of the tour. Opening acts Git Some and Silver Snakes saw fairly sparse audiences, but the crowd filled out during the third set from French rockers, La Femme. They populated the stage with a calculated presentation of chaotic spectacle. Each member had a unique style, from pseudo-vaquero panache to metrosexual boxer chic. They played a mix of moody surf and new wave, bringing in enough punk thrash to lay the groundwork for Trail of Dead’s set, especially in their wild finale.

After a brief break for roadies to clear La Femme’s equipment and power up Trail of Dead’s gear, the band came out and launched immediately into “It Was There That I Saw You.” The opening vamp passed quickly and they soared into the driving swirl of the song. The dynamics of the album version were preserved, but the band was wired and pounded through the tunes. Conrad Keely seemed to swap out guitars for almost every song and Jason Reece often traded instruments with Jamie Miller, but these transitions never slowed the flow of their performance. Even stripped of their studio production nuances – like the ambient crowd sound and free jazz noodling at the end of “Baudelaire” – the tunes lost none of their power or presence. Trail of Dead nailed the punk foundations of the songs and made them as cathartic and moving as ever.

It was clear that the crowd was intimately familiar with Source Tags & Codes, sometimes feeling torn between singing along and surrendering to the visceral punch of the music. For all the meaning that we imbued these songs with, Keely and Reece were even more invested. They played like they were tapping into their younger selves with the hindsight of all the changes they had seen. The personnel shifts and bulkier configurations of the past seemed to melt away and this four piece group channeled the epic scope of that earlier incarnation. Like guitarist/drummer Miller, bass player Autry Fulbright II has only been with Trail of Dead for three years, but his charismatic presence was a strong part of the stage chemistry. Both men seemed just as committed to these songs as Keely and Reece.

All too soon, Keely marked the end of the series, noting “This is the last song,” and then he sighed, “It’s a short album.” The wistful sound of “Source Tags & Codes” was perfectly appropriate and it was even shorter without the string coda of the album version. As the final notes faded, the audience seemed drained for a moment before the band kicked into “Mistakes & Regrets” from 1999’s Madonna. It captured the retrospective mood in the wake of Source Tags & Codes and then dismissed it. The crowd settled in as Trail of Dead wandered through another five songs from their back catalog, with particularly strong performances on “Catatonic” (Lost Songs) and “Will You Smile Again?” (Worlds Apart, 2005). For this latter tune, Reece reached into the crowd, giving people a chance to sing along and participate in the ritual. After wrapping up the main set, they came back out for a single encore, a version of “Richter Scale Madness” from the band’s first album. The nihilistic flail of the tune energized us all for the late night ride home.