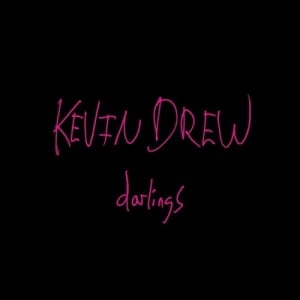 [xrr rating=3.0/5]As co-leader of Broken Social Scene, Kevin Drew specialized in being the eye of a musical hurricane. Every BSS song seems haphazardly written on the fly, only anchored together by Drew’s vision and his sheer commitment to making that project work. It’s not surprising, then, that the group disbanded after Forgiveness Rock Record, where not even Drew’s willpower was enough to rescue the band from itself. It’s also not surprising that Drew’s first actual solo effort (second, if you count the BSS-presented Spirit If…) is so markedly different from his old band in many ways. After years in a messy, anthemic rock band, Drew has given us the concise, polished Darlings, a synth-driven album with considerably more modest goals than one would expect from him.

As this is an album written and recorded by Drew, much of Darlings is concerned with its creator’s issues with love and sex, issues that would have been blown up to epic, grandiose proportions in the past. Now, though, Drew approaches things with much more subtlety. Granted, there’s nothing all that subtle about naming songs “Body Butter” and “Good Sex,” but Drew seems more interested in treating these subjects with intimacy as opposed to crafting anthems, and the album certainly works better for it. “Good Sex,” in particular, shines as one of the better melodies on the record, and it showcases how Drew’s new arrangements work best. It also helps that Drew is in fine form as a singer throughout Darlings, which keeps some of the more sexually explicit songs from devolving into winking jokes à la “Me and My Hand” or “Love vs. Porn.” Sincerity fits Drew, and he seems to have picked up on that with Darlings.

The album does have moments where Drew indulges in some of his other bad habits, though. He’s always used lyrical repetition as a bit of a crutch, and while there’s nothing egregiously repetitive on Darlings, “You Gotta Feel It” comes close. Worse still is “Bullshit Ballad,” which is the closest that Drew comes to aping his old band in that it sounds like a half-written BSS song. The sonic bombast of “Ballad” also sticks out on what is otherwise a very modest, subdued album. Given the musical shifts Drew makes on Darlings, it’s hard not to see the song as a paean to old fans looking for another “Superconnected” or “Lover’s Spit.” Given the strength of the rest of the LP, from the hypnotic spoken-word of “Mexican Aftershow Party” to the wonderfully percussive “You in Your Were,” one can expect Drew to feel less pressured to revisit his past on future solo efforts.

Darlings isn’t quite a reset button for Kevin Drew, but it seems like that’s what he was trying to do with this project at times. While it’s not musically adventurous enough to really be a case of someone ripping up their work and starting again, the album does succeed in casting Drew in a different light as a songwriter. After years of being the wrangler of a ragtag indie rock collective, Drew seems to want to exercise more control over his work from this point forward. Given how Darlings turned out, that might not be such a bad idea.