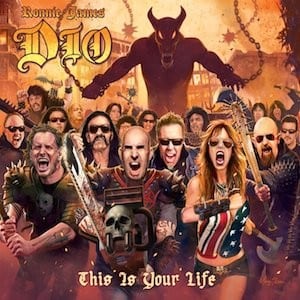 [xrr rating=2.5/5]In theory it’s a great idea. Ronnie James Dio was one of the great heavy metal vocalists, fronting bands as diverse in approach as the pop-metal of Rainbow, the dense textures of Black Sabbath and the keyboard-and-power-chord concoction of Dio. His operatic holler was truly impressive, and his knack for quirky vocals—“We’re a ship without a storm, the cold without the warm” and so forth—made for an effective combination. Following his death in 2010, metalheads around the world praised his contribution to the genre, not least of all the two-fingered “devil horns” gesture which he is credited with popularizing. (It also means “I love you” in American Sign Language, but don’t let that put you off.)

The arrival of tribute album This Is Your Life seems inevitable in retrospect, but it’s hampered by the fact that, frankly, there are few vocalists out there who can hold a candle to the subject of the tribute. This leaves the performers with a choice: try to match the original performance, and fail to a greater or lesser degree, or else take a different tack altogether. Most opt for the former.

The record doesn’t start badly, as Anthrax kicks out a serviceable version of “Neon Knights,” the barn-burning opening track to Black Sabbath’s 1980 album Heaven and Hell (the one with the pictures of angels smoking cigarettes and playing cards on the cover). Unfortunately, this is followed by the weakest track here, Tenacious D’s pathetic cover of “The Last in Line.” It’s a mystery why Wendy Dio, Ronnie’s wife and manager, would choose to include actor Jack Black’s weak excuse for a metal band in a project of this sort—and even more bewildering why they would be allowed to vomit all over one of Dio’s best tunes—but there you go. The vocals are weak, the guitar is lame, and there’s a recorder interlude. I shit you not.

After this travesty, all bets are off. German vocalist Doro does a nice job with “Egypt (The Chains Are On)”, bringing a sultry-but-powerful approach of her own that honors Dio’s without trying to mimic it. Judas Priest frontman Rob Halford contributes a typically bombastic version of “Man on the Silver Mountain,” with guitarist Vinnie Appice contributing a liquid, bluesy guitar intro that makes the listener forget all about Ritchie Blackmore’s straightforward crunch in the original. Finally, Metallica’s three-song medley (why do they get to do three songs? Oh right, it’s Metallica) is highlighted by “Kill the King,” from Rainbow’s Long Live Rock and Roll, an underrated album filled with gems. Wisely, the band chooses songs at the thrashier end of Dio’s spectrum, thereby avoid the sustained operatic wails that would be far beyond James Hetfield’s range.

Elsewhere, though, the tunes come off as flat. Killswitch Engage contribute a take on “Holy Diver” which tries to replace Dio’s soaring pipes with demon-throat growling, and fails epically, while Halestorm’s “Straight Through the Heart” is just middle-of-the-road enough to make you wish you were hearing the original. Ditto for Adrenaline Mob’s “The Mob Rules,” which is a great song played note-for-note like the original, with worse vocals. Sort of makes you wonder, what’s the point? There are several other such here.

The album closes with Dio himself singing the reflective tune “This Is Your Life,” which carries some poignancy in light of his death. It’s a soft, piano-driven number and not a bad tune, but it does little to showcase the man’s remarkable pipes. A listener unfamiliar with his vocals might be left wondering what all the fuss is about.

Fans of Dio are likely to be divided about this release, which pays tribute to an icon but is largely forgettable in and of itself. There are a handful of good tracks here, but the majority just make the listener want to go back and hear the originals. Such is the nature of tribute albums, perhaps.