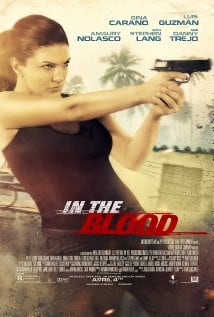 [xrr rating=2.0/5]Apart from The Dark Knight, which functions as more of an opera, anyway, has any action movie of the last decade had as much impact as Taken? Not only did it create an entire subgenre of Liam Neeson vehicles, but it found a way to make intimate the broader-minded, post-9/11 thriller that had started to feel stale as public support for the War on Terror all but totally collapsed. With outright terrorism replaced by a vague, ethnic threat to one man’s immediate concerns, Taken exploited contemporary imagery but laid it on top of a film structure better suited to the ‘80s heyday of one-man army movies, and for all its dubious politics, it’s undeniable that the film rejuvenated an anemic genre.

In the Blood is the latest film to follow in Taken’s footsteps, in this case following the exploits of newlywed Ava (Gina Carano) as she tears around the Dominican Republic after husband Derek (Cam Gigandet) goes missing after a suspicious accident on a zipline. In short order, the new bride is subjected to mass gaslighting as the hospital tells her Derek never arrived, the zipline operators claim to have never met her and, when they see cell phone video of Ava administering a beating to touchy club staff and patrons from the previous night, the local cops even accuse her of killing her husband. Set to be shipped back to Puerto Rico, then home to Connecticut, Ava does the only thing you can do in that situation: she kicks her accompanying officer into unconsciousness, swims back to the island and begins to pummel and torture anyone with even the slightest connection to Derek’s disappearance.

If Neeson made such an impression in Taken for suggesting that his physical strength could match the hard blows of his weighty line delivery, Carano brings athleticism to the role first and gravitas third or fourth. In some respects, that works in her favor: Neeson’s inherently magnetic presence made his terrifying character uncomfortably thrilling, but the flat, slightly rushed tone that creeps into Carano’s voice when she threatens people with pain and death paints Ava not as an emblem of irrepressible American righteousness but a simple sociopath. Absurd flashbacks to an adolescence of brutal training at the hands of her unsentimental warrior of a father (Stephen Lang) hammer home that Ava is a fighter, but once again Carano’s limitations as a traditional actress work in perfect tandem with her exceptional skills as a physical performer, saying more in the delivery of her lines than the thick, clichéd dialogue itself can put across.

Ava’s viciousness is reflected by some of the aesthetic decisions. The sound effects of her attacks are so amplified that they verge on Shaw Brothers territory, yet Carano knows how to make a punch or a kick look so real and powerful that you can almost buy that struck flesh could reverberate as loudly as it does in the audio mix. Unfortunately, Steven Soderbergh spoiled audiences by introducing Carano with a film that shot her action in observant long takes, whereas In the Blood trades in the obsessively over-cut antics against which Haywire reacted. Car scenes are even worse, with so many mountable cameras placed on dashes and by wheels that chase scenes spin more time wheeling around the vantage points of a vehicle than they do simply keeping an eye on the enemy.

And while it can be engaging to see Carano do what she does so well, there’s something more than slightly disturbing about watching this white American woman decimate an impoverished nation, with the anti-American sentiment of the locals used as justification for her merciless spree all while ignoring that rampages like hers only deepen that sense of malice. Taken dabbled in similar waters, but it showed off a macabre sense of humor at times, not least of which in setting the film’s action not in a developing nation with animosity for colonial powers but in a first-world ally state. Its French crew played Bush’s “If you’re not with us, you’re against us” declaration out as a sick joke, but a movie like In the Blood suffers from Bad Boys II Syndrome, wherein poor nations are further demolished by vengeful Westerners who are presented as being well within their rights to murder people in barrios in full view of children or kill anyone who cooperates with criminals without stopping to look at the life circumstances that would drive someone to try and eke out even a modicum of safety. Practically everyone introduced in the film exists to be beaten or killed by Ava. That the person she does this for is played by Cam Gigandet, who is so dull he even manages to fill his absence with the ghost pains of his lack of personality, only makes her spree all the more unforgivable.