Beloved Archbishop Rushman (Stanley Anderson) is found brutally murdered in his Chicago apartment, a 19-year-old boy covered in his blood fleeing the scene. By the end of the day, the murder has become a media frenzy, and hot shot defense attorney Martin Vail (Richard Gere) volunteers his services to the suspect, the displaced, soft-spoken Kentucky boy Aaron Stampler (Edward Norton). Meanwhile, the shady folks in the Prosecutor’s Office assign Vail’s former love interest, Janet Venable (Laura Linney) to the case, making it clear that her career is over if she allows certain uncomfortable facts about the archbishop to be revealed during trial.

A commercial hit in its day, Primal Fear (1996) was received less kindly by critics, many of whom gave the film bad reviews upon its release. While there was uniform praise for Edward Norton’s performance as the young maybe-murderer, maybe-victim, many critics could not separate the attention-starved Martin Vale from Richard Gere, the actor who played him. Fresh off the critically savaged First Knight (1995) and weathering a media frenzy of his own as his marriage to supermodel Cindy Crawford was ending, Gere was excoriated by more than a few critics, often for his celebrity status—and sometimes his hair—with precious little said about his performance.

The years have been kind to Primal Fear in a lot of ways, and Gere’s affable, handsome presence, at a distance from all the tabloid noise and without the recent memory of a box-office bomb, has proven to be more than enough to carry a film. Dismissed as lacking substance and merely mugging his way through the film, Gere’s subtle, layered performance was recognized by Roger Ebert but few other film critics. There’s a moment where Vail is talking to a reporter, defending himself, and the easy, clichéd answers are right there for him to pick, and no one would blame him. Watch Gere’s face, the tiny twitches as he decides which path to take; compare that to his ruthless questioning of State’s attorney John Shaughnessy (John Mahoney), the expressions, the body language. This is no sleepwalking performance, but an actor committed to the role of an attention-starved man struggling to control his ego and his emotions. And compare it, too, to his dogged pursuit of the beautiful Janet Venable, asking for just one more dance. 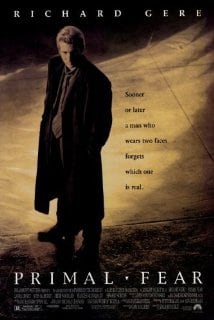 Not merely distanced from the baggage that tabloids and box office laid on Gere’s shoulder, Primal Fear has also traveled miles away from all those lazy, easy comparisons to the O.J. Simpson trial, which had ended exactly six months prior to Primal Fear’s release. And finally, the movie’s subject matter—a Catholic priest suspected of gross misconduct and sexual abuse—is now old hat. The film was released years before either the Pulitzer-winning Boston Globe coverage of pedophilia within the Catholic Church, or the release of the John Jay Report, and today’s familiarity with the topic allows audiences to focus more on performances and characterization, which is where Primal Fear’s strength really lies.

It’s this deliberate attempt to tone down the true nature of the archbishop’s character that sadly dates Primal Fear. And the real shame of it all is that many viewers and critics at the time still felt Primal Fear went too far with the salacious content, while others, like the Man of a Thousand DVD Blurbs himself, Peter Travers, seemed almost irritated that the “crass” and “vulgar beast” of the novel had been “tamed.”

Critics also complained about what they felt was an underused all-star cast. It’s an unfair accusation, at any rate; most actors in the supporting cast have several significant scenes, and it’s their powerhouse performances that make Primal Fear something more than slick Hollywood product. Norton famously burst onto the scene with his incredible performance as Aaron Stampler, garnering him a host of accolades and an Academy Award nomination. Steven Bauer and Andre Braugher do more with their roles than almost anyone else in the film, refusing to turn in one-note character perfs like so many lesser actors would have. And Alfre Woodard steals the whole film in a role so small it could easily be considered a cameo. She just grabs hold of her role as a no-nonsense judge and does it to perfection, crafting the epitome of a “so good they can’t ignore you” performance.

Shockingly, Laura Linney puts in the film’s weakest performance. A fine actress in almost every role, in Primal Fear she lacks confidence and charisma. She’s all stiff poses and mannered speech, so uncomfortable (especially as she fakes smoking) that she’s difficult to watch. It would seem at first to be a case of failed characterization, except for a few really terrific moments in the film, moments which sadly do little more than highlight how bad she is in the rest of it. It doesn’t help that her Janet Venable is yet another powerful female character defined less by ability than by sarcasm. Any power Venable holds is undermined by her incessant complaining and acerbic nature, and she becomes not only cliché and tedious, but no real match for Martin Vail.

The first act of Primal Fear is practically ballet, a well-paced thriller that moves into the real meat of the story at exactly the right pace. The audience is allowed to know and understand the main characters and their motivations, to piece together plot points and enjoy the excitement of a crime thriller. Unfortunately, Primal Fear was not immune to mid-‘90s Hollywood sheen, thus a quick montage separates the first two acts before slamming right into the courtroom drama. This sells the film short, because Primal Fear is a film you watch for the performances, not for the trial and certainly not for the suspense; even in 1996, everyone in the audience would have solved the so-called mystery by the time Stampler was found hiding in a hole about 20 minutes in.

That there’s a twist ending isn’t a surprise, of course. The real surprise is that there is a twist to the twist. The expectations of the audience are shattered, not by the reveal, but the details of the reveal; it’s the kind of movie that opens up hours after watching. It lingers, keeps tickling your memory as realizations slowly come to light. Soon, Venable’s sarcasm doesn’t seem so misplaced anymore. There’s that honest answer, but now you realize it was a crooked question. And what was on those dozens of unwatched videotapes? The truth emerges as we watch Martin Vail walk away at the close of the film, unobserved, as he realizes he’s been dancing with the wrong people.