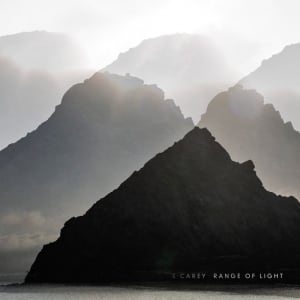 [xrr rating=3.25/5]Justin Vernon’s voice can be polarizing, but the meticulous crafting that has gone into his songs can’t be denied. Songs like “Perth” and “Holocene” were serene beauties. With Vernon’s bandmate Sean Carey releasing his second album, we can be sure that Carey’s hand was in some of the orchestrations on Bon Iver . Range of Light is an occasionally too-light album brimming with stunning production.

Carey has a great ear for minuscule adjustments that make his songs ring. The first half of the album in particular has a great propensity to quietly reveal stunning moments. Small chimes, rushing violins and light drum fills are calmly and coolly mixed together in the hands of Carey. Opener “Glass/Film” begins with a vibrating note that seems to be the synthesis of a keyboard, piano and some odd chime. That single pulse expands and, like a musical Rube Goldberg machine, sets off the rest of Carey’s instrumentation. It sounds like an Americana version of Death Vessel’s recent Island Intervals with bells clacking together over jutting piano chords and squawking guitar. When the banjo rambles in it’s clear that Carey has spent quality time with some Sufjan Stevens records, but on the best songs here Carey forges his own folky path. Following track “Creaking” is driven by fast yet softly played drums that serve as the base to the spacey song. The last minute of the song takes a drastic and graceful change, with guitar and piano dueting with elegance.

The third track “Crown the Pines” is the most instantaneous track and for good reason. Justin Vernon visits the verses, giving his strange ghostly tone on top of Carey’s light tenor. Carey’s composition work is stunning, violins shift from rushing to languid in seconds and the harmonies move urgently. This is the pinnacle of Range of Light and the track list becomes uneven afterward. The songs after “Crown the Pines” are likely to pass on without much thought. They’re lovely, to be sure, but none of them are captivating, passing like a cool breeze. This mainly applies to the final three tracks which nearly move into sappy waters. “Fleeting Light” would make a good lullaby, but it feels misplaced and the predictable riff combined with lackluster slide guitar make “The Dome” fundamentally weak. Closer “Neverending Fountain” plays too close to Disney credits sequence fare and is too saccharine.

The tracks that best represent the album are sandwiched between the heights of the first three songs and the final subpar pieces. They’re flawed, true, “Fire-Scene” takes nearly two minutes to fully flesh out, “Radiant” might be an unnecessary minute piece, and “Alpenglow”’s calls of “I was wonderin’ you would be my wife” are too sweet. But each one of these songs also contains flashes of Carey’s best work. When “Fire-Scene” finally does come into its own it stands as two minutes of spiraling wonder with Carey softly cooing “All I want is honesty” a line that packs an emotional punch despite its understated delivery. Carey’s voice blends excellently with his piano and steel guitar on “Radiant” and “Alpenglow” turns into a massively stunning song once a key change completely shifts the song. “I grabbed her head/ And dipped her in the lake/ And seldom seen, a side of me,” Carey sings as the song evolves into post-rock territory, reminiscent of Sigur Ros’ “Varúð.” It’s a grand reminder that, despite a few lunges into watered down folk, Carey can create breath taking moments.