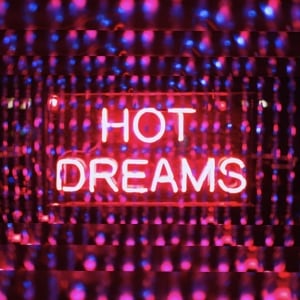 [xrr rating=4.0/5]Taylor Kirk’s voice can deftly sway between ephemeral beauty and impending doom; and as their frontman’s vocals go, so goes gothic-tinged Canadian folk-bluesmen Timber Timbre. Ever since the band’s 2009’s self-titled breakthrough—which followed two self-released records that hadn’t yet settled into a distinctive style—Timber Timbre has quietly cornered the market on creepy-cool, their foreboding sound conjuring swampy, macabre imagery as readily as it does smoky, red-lit nightclubs. This mixture of classy and cobwebs, of dapper and dank, falls more in line with Cajun than Canuck, but nevertheless it got the band shortlisted for Canada’s Polaris Prize in 2011 for their winkingly-titled Creep On Creepin’ On. With Hot Dreams, the stakes are raised, as there’s no more slithering under the radar for this brooding quintet.

Hot Dreams showcases a return to the sparse, slinking instrumentation found on Timber Timbre. For as breathtakingly uncanny as the lusher instrumental flourishes of Creep On Creepin’ On were, an argument could be made that they diverted attention away from the band’s absolute strength: Kirk’s velvety baritone croon. Hot Dreams still sidles through eerie wordless interludes, most notably on the backend of ominous opener “Beat the Drum Slowly” and the entirety of both the brief interlude “Resurrection Drive II” and instrumental closer “The Three Sisters” (which, when it’s not injecting ‘80s crime-drama saxophone, delves into the kind of fluttering industrial distortion that calls to mind Tobe Hooper’s The Texas Chain Saw Massacre). But on the whole, Kirk stays front and center on this album, clutching (at least in my imagination) an oversized vintage microphone, his lyrics pouring forth as unnervingly as the overall mood.

The title track may be the best example of this. The tune itself is sleepy and slow, drifting along like so many listless lounge acts before it. But then Kirk, who channels just a hint of Roy Orbison as he sings about wanting to be a champion in his lover’s eyes, subtly subverts the faux saccharine tone with the line “I want to follow, follow through/ On all of my promises and threats to you, babe.” The thin line between love and hate is further highlighted when he sings, “I wanna take, I wanna take, I wanna take/ Take all of your air.” It’s a song where daydreams and nightmares are literally interchangeable, from a band who uses the same approach with themes of life and death.

For all this glorification of Kirk’s larynx, that’s not to say the music itself isn’t also crucial. “Curtains!?” highlights this, as quavering guitar befitting David Lynch joins shrieking keys and shifty bass to dig down into one of Hot Dreams’ deepest grooves. But portentous instrumentals are ultimately the ground that allows the form of Timber Timbre’s stark songwriting to rise up. In “Run from Me,” we’ve got perhaps the most striking example of gentle vocals paired with menacing lyrics. As Kirk sweetly sings, “Run from me, darling/ Run, my good wife/ Run from me, darling/ You better run for your life,” the recurring theme of violent passion comes to a head. First paired with only a tender bed of piano chords, “Run from Me” opens up with gentle guitar strums and Kirk repeating the command “run,” until building strings and soaring soprano wails (reminiscent of the “Star Trek” TV theme, oddly enough) add what amounts to almost a satirical vibe until the whole thing blows open into another shambling groove.

Meanwhile, “The Low Commotion” employs strings from the outset and then sparks into driving staccato piano chords after Kirk sings the characteristically passion-threat line “You turned me on/ Then you turned on me.” In “The New Tomorrow,” the steady tempo drops midway through as Kirk’s voice is multi-tracked into a choral swell as he intones “Yes, we see the body/ Of my love.” As with most Timber Timbre songs, there’s vivid imagery here too, as Christian mystic X-ray vision is at one point invoked. But lest Kirk too often directly addresses lovers he also seemingly throbs with desire to kill, “Bring Me Simple Men” speaks condescendingly to a band of brothers as only an alpha male can.

Hot Dreams won’t dazzle you the first time through, especially if you’re more attuned to the accessibly haunting moments found within the preceding Creep On Creepin’ On. Instead, Timber Timbre’s latest will slowly seep into your bloodstream until you’ll want nothing more than to set it on repeat and again listen to Kirk croon about murderous love.

Despite the film’s flaws, Cronenberg offers a cynical take on late capitalism, the pharmac…