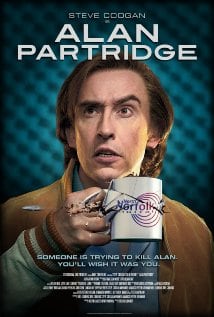 [xrr rating=4.5/5]Radio personality Alan Partridge (Steve Coogan), who has spent over 20 years proving himself to be the biggest tosser on the airwaves, exhibits signs of personal growth and maturity in his first feature film, the aptly-titled Alan Partridge. He’s a touch more competent, less rude, even slightly better dressed than the Alan we’re used to. In return, he now has fans, works well with others and is occasionally praised for jobs well done, something that will probably leave most Alan Partridge aficionados uncomfortable, perhaps even suspicious.

It’s ironic that it’s this slightly-mellowed Alan who is given the chance to succumb to an evil, capitalistic plot of the kind that could finally make him a household name. As Alan Partridge opens, we learn his long-time employment at North Norfolk Digital radio station is threatened thanks to a takeover by the hipper, more modern Shape Digital. The new station owners are intent on a revamp. When Partridge learns he can save his own job if fellow radio personality Pat Farrell (Colm Meaney) is fired instead, he sabotages his colleague without a moment’s hesitation. Farrell gets the sack, only to return to the station with a heavy grudge and a loaded gun, while Partridge cynically manipulates the hostage situation into a chance at fame and his long-dreamed-of return to television.

Comedian-actor Steve Coogan dons a terrible wig and interesting teeth to reprise his role as the wildly popular, and very fictional, British radio host. For those in the U.S. unfamiliar with the Alan Partridge shows, this film’s story of a man gone mad with grief and loss, driven to hold his former coworkers and friends hostage at gunpoint, might not seem ripe for humor. Yet this rather touchy subject matter won’t surprise long-time Partridge fans, who have laughed through sudden heart attacks, manslaughter, attempted kidnappings and people crushed by dead cows. In comparison, Pat Farrell’s siege in Alan Partridge is almost light entertainment.

In the same vein, Partridge himself indulges in fewer off-color comments, his infuriating and clueless literalism causing the most offense, as well as a social awkwardness so severe it would immobilize a lesser man. In previous series’, these numerous faux pas were frequently met with a quizzical look from those around him, or a firm, forgiving smile. These reactions never failed to be funny, but there was always a sense that Partridge was tolerated far more often than he rightly should have been. This tolerance confirmed that Alan Partridge, wanker though he may be, was the center of his particular universe, which in turn made his healthy ego at least a little understandable.

In Alan Partridge, the ego, as they say, has landed. Gone are scenes where every character patiently listens to Partridge deliver what amounts to a monologue in medium close-up; instead, even tertiary characters have their funny moments, Colm Meaney is given room to let his character develop, and we’re treated to long shots that reveal a single, subtle reaction, often from the very funny Tim Key as Sidekick Simon, to one of Alan’s gaffes.

Perhaps there isn’t much left to purge nowadays, because Alan Partridge has matured, and it’s this change that informs his choices during what looks to finally be his chance at success, such as it is. As Farrell mourns the life he should have had, Partridge sees dangling before him the life he always wanted, his for the taking as long as those pesky morals and ethics don’t get in the way.

It’s only fitting that Partridge gets his big break at the expense of others’ lives; in a 2002 episode of “I’m Alan Partridge,” while vying for his own television show, he declared, “I’d basically like to understand man’s inhumanity to man, and then make a program about it.” Alan Partridge is that opportunity. Make no mistake, Alan Partridge is in no way a well-adjusted man, but the result of his limited personal growth is a hilarious, assured film.