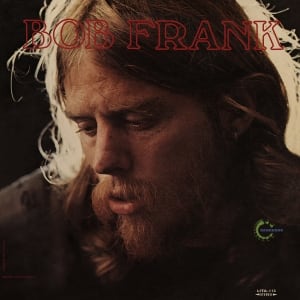 [xrr rating=2.75/5] “Take a look at the wino/ Take a look at the bum/ Dirty clothes/ Foul Breath/ And his teeth rotting out of his gums.” In the liner notes to the Light in the Attic reissue of his eponymous 1972 album, originally released on Vanguard, Bob Frank explains that he wrote “Wino” about himself and what he did when he had long hair and a beard. The singer-songwriter can barely disguise his self-loathing. He also recognizes his limitations as a composer. “To me, they seem too off-the-cuff and simplistic … but those are the songs of mine that people like the best. It’s something about the conversational tone that comes across.”

The conversational tone has a long tradition in pop music from Walter Huston to Tom T. Hall to Lou Reed. But the conversationalist had better have a distinct voice. Frank’s debut album sank without a trace. Perhaps its straightforward folk sensibility was out of step with the times, a charge leveled against another recently reissued album from the ’70s Memphis scene, Sid Selvidge’s The Cold of the Morning. Frank doesn’t have Selvidge’s chops, but like Selvidge, part of the damage sustained by Frank’s career was self-inflicted, another self-destructive chapter out of Memphis, rock and humanity.

Frank came out of the same scene that gave birth to one of the great self-destructive rock ‘n’ roll stories in Big Star and Alex Chilton, the subject of a recent biography. Producer Jim Dickinson, an integral part of the Big Star story and producer of Sid Selvidge’s album, produced Bob Frank and covered one of its songs for his own 1972 album Dixie Fried. But these lesser-known singer-songwriters don’t bring their personal demons into their music. You can hear the self-destruction in Chilton’s music, which made it erratic and fascinating. You can hear the self-loathing in Bob Frank’s lyrics, but he doesn’t transform his love of Child Ballads and Jimmie Rodgers the way Chilton transformed his love of the Beatles and Memphis soul. Which leaves Frank as a competent coffeehouse singer whose music doesn’t have the emotional charge to go beyond that.

Bob Frank is a conventional folk-blues album, Frank accompanying himself on guitar for most tracks, and supplemented on others by guest musicians like country fiddler Buddy Spicher and guitarist Eric Weissberg. The latter, best known for “Dueling Banjos,” was a mainstay of the Vanguard label. He’s also one reason Frank self-destructed.

Frank was not happy that Weissberg’s guitar parts were dubbed on top of his own. “I thought [Vanguard] said they’d never release [my album] unless I totally approved, and since they didn’t do what they told me they would,” Frank bit the hand that fed him. During the album release party at New York’s fabled Max’s Kansas City, Frank refused to play songs from his album. When Vanguard co-founder Maynard Solomon pleaded with Frank to play something off the album (“That’s the whole point why we’re having this thing!”), Frank shouted back, “If anybody wants to hear the songs off the album, let ’em go buy the fucking album!” Frank never heard from Vanguard again.

I wish you could hear that anger on the album. Frank’s songs are concise, and none of them wear out their welcome. The album clocks in at under a half hour, with tracks as short as “Before the Trash Truck Comes” at 1:16 and no longer than the three and a half minutes of “Cold Canadian Pines,” which suffers from Frank’s mannered vocals. Vocal affectations weigh down a few tracks on Bob Frank and seem to indicate a singer who hasn’t found his voice, a condition further indicated by the album’s most memorable track. “Judas Iscariot” casts Jesus as a stoner, and was response to Bob Dylan’s “The Ballad of Frankie Lee and Judas Priest” from John Wesley Harding. Frank went so far as to borrow Dylan’s chord changes for his own song of Judas, but the novelty of a stoner Jesus isn’t enough to make the derivative song a classic.

Frank left music for an extended sabbatical, which, in another parallel with Selvidge, he spent taking care of his wife and kids. He wouldn’t release an album again until 2001, and has since recorded an album of songs about historical murderers (World Without End) produced with ominous murk, as well as the country-flavored album Ride the Restless Wind. I love that Light in the Attic and other reissue labels have taken it as their mission to uncover forgotten and neglected music. Jim Dickinson called Frank “the greatest songwriter you never heard,” but I’m afraid I don’t hear it.