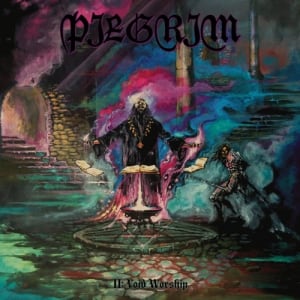 [xrr rating=3.25/5]Now a duo after the loss of their bassist, Rhode Island’s Pilgrim continue to draw inspiration from doom metal’s tube-amp heyday. Pilgrim’s 2012 debut – Misery Wizard – introduced the band as worthy members of the same tribe as Candlemass, Cathedral and Electric Wizard, one that loudly idolizes gloomy Sabbath riffs and generally plows forward at glacial pace. The band’s personality connects Pilgrim to classic doom as much as that bone-shuddering churn, starting with the members’ names; Count Elric the Soothsayer may have left the band, but drummer Krolg Splinterfist, Slayer of Man still propels the guitar and theatrical vocal work of frontman the Wizard. Like Pallbearer’s 2012 success, Pilgrim’s debut took a retro formula and proved there’s room for another act recording seismic drum fills over a funereal lurch and gothic fantasy lyrics – astoundingly tight musicianship, beefy production and the Wizard’s unusually grandiose baritone combined with songwriting that remains impressive for a band so young.

Pilgrim’s two remaining members have no trouble maintaining the spirit of that debut on II: Void Worship, but the album itself isn’t nearly as consistent. Things start off promising enough with four varied tracks that fulfill all the expectations of the band’s debut. “Intro” combines eerie jest with classical metal technicality, channeling as much personality as any Pilgrim song to date. This leads into the archetypal towering dirge “Master’s Chamber” – a bit overlong even with the genre’s patiently (s)low standards – a track that simultaneously re-establishes the band’s doom cred and expands the intro’s engaging theme into walls of devastating, concussive riffs. At only four minutes, “The Paladin” still manages to be the centerpiece of II: Void Worship, a stomping gallop making it the album’s most energetic track. The Wizard bellows out his gigantic vocal finisher sounding like he’s barely holding it together, a seething arcane force rushing out ahead as his axe goes nuclear. It’s a performance that makes Splinterfist’s frenzied drumming sound necessarily tame.

Despite all those moments of thundering brilliance, II: Void Worship includes multiple instrumental numbers that don’t really go anywhere and succumb to a lumbering crawl. “Dwarven March” doesn’t include enough of a melody to escape that tedium, but “In the Presence of Evil” makes the most of the album’s sometimes taxing relentlessness by intensifying the song’s unsteady footing. II: Void Worship is at its best when the Wizard chimes in – including closer “Away from Here”, with its widely disparate vocal peaks and valleys – as he varies his delivery for maximum dramatic impact. Those ominous whispers, wailed falsettos and baseline warbles provide much of the identity that makes Pilgrim champions of their chosen genre. Considering Splinterfist and the Wizard now have even tighter control of Pilgrim’s sound, it’s bittersweet when the duo chooses not to prioritize their strengths in favor of less successful alternatives.