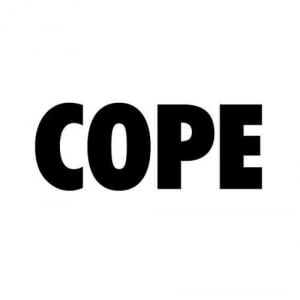 [xrr rating=3.0/5]Manchester Orchestra has always been a band that revels in visceral experiences. Fueled by their intensely personal lyricism, the band delivers immediately gripping music punctuated by rich dynamics. When they released their last full-length Simple Math, they displayed a sense of musical growth that few could have expected from a band that was previously geared towards such a gritty, bare-boned aesthetic. Simple Math transformed Manchester Orchestra from an alt-rock powerhouse into a band that felt as orchestral as they were rugged. However, Cope finds the band taking a step backwards, pulling themselves out of the proverbial rabbit hole and back into the straightforward tendencies of their previous work.

Cope is an album that doesn’t go through much of an instrumental journey; all of the songs tend to chug along at the same pace, accentuated by palm-muted verses and bellowing choruses. When vocalist Andy Hull roars out in hopeless despair on the album’s opener “Top Notch,” one has high hopes for the album’s potential tenacity, but after the third track of the same cookie cutter instrumentation it becomes a bit of a bore. Make no mistake, Hull’s lyrical content is as potent as ever, chronicling the trials of tumultuous relationships and coping with all that goes along with them. The unfiltered lyrical prowess is enough to keep dedicated Manchester Orchestra fans fully pleased with Cope, but those that are looking for a bit more musical embellishments may need to search elsewhere.

Whereas Simple Math was filled with lush strings and perplexing dynamic shifts, Cope feels much more like the album companion to their sophomore effort Mean Everything To Nothing. Driving drumbeats propel these songs forward as heavily distorted guitars bounce between a hush and a roar, playing off of Hull’s vocal ebb and flow. However, whereas previous efforts from Manchester Orchestra always bookended these heavier, barn-burning tracks with something more melodic, the band has their foot firmly on the gas throughout most of the album’s duration. Sure it’s fun to go headstrong with some things, but the lack of more somber, slower track dulls down the aggressiveness.

Manchester Orchestra has always been a band that can strike to the core of their listeners, but Cope feels much more like it’s just scratching the surface. The songs are still weighty, dealing with self-deprecation and doubts over love and the future, but they lack the forthright nature of older works. However, it becomes a bit hard to nitpick at Cope for being too aggressive, as the band blatantly stated that an aggressive album is what they were shooting for.

Cope is essentially your standard Manchester Orchestra album that’s been injected full of snarling guitar riffs and pounding drums, leaving Hull no option but to shout out his transgressions with a strong sense of urgency. Tracks like “The Ocean” and “All That I Really Wanted” are excellent displays of this, churning along with subdued verses before they swiftly unfurl into a roaring chorus made grandiose by subtle harmonies and infectious melodies.

The sense of regularity on the album is easy to get over if you’re a fan of the few song structures that they pull out. Manchester Orchestra have perfectly captured an accessible sound and amped up the intensity by adding in an undeniable sense of personality to the mix. For every dud on the album there are brilliant tracks like “Cope” and “Indentions” that point to the elaborateness of the band’s previous efforts. Cope may immediately seem like a backwards step for the band, but once you delve deeper into the album it’s clear that the group’s trademark grit still remains prevalent.