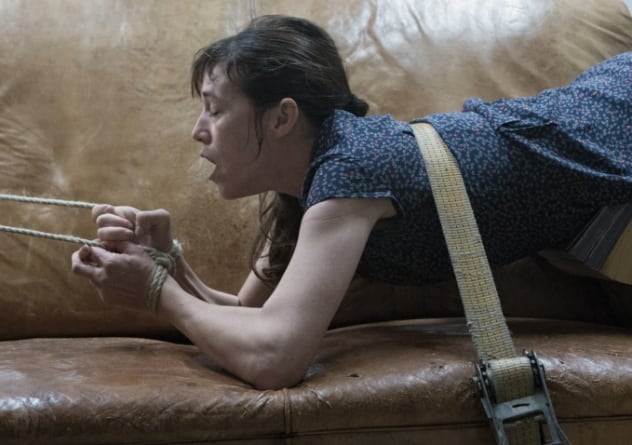 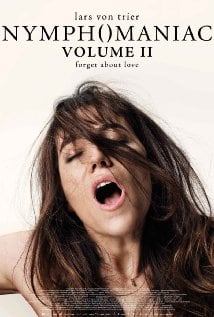 By splitting Lars von Trier’s sprawling Nymphomaniac into two parts, American distributors are getting two reviews on what is essentially the same film. When we last left our protagonist Joe (played by both Stacy Martin and Charlotte Gainsbourg), she has lost all sense of sexual feeling. And while the first part of the film ended up being much funnier and slyer than anything else in von Trier’s catalog, the Danish director falls back on his old tendencies in the second part, proving once again that he has little faith in humanity. Hopelessly in love with Jerôme (Shia LaBeouf), Joe spends the second volume of the film trying to rid herself of attachment by doing some very bad things.

Just like the first segment, many of Volume II’s more shocking sequences have been doused by an aggressive marketing campaign that revealed many of its most salacious moments. We know that Joe is going to solicit, via a translator, an African man to fuck her. We know that Joe gets into bondage and sadomasochism. We know that Joe tries to extinguish her desire. Not only does the fractured presentation of the film work against a stellar, complete work, but moments meant to induce gasps now feel passé with prior warning.

The sex in the first segment of Nymphomaniac is sans eroticism and, while any intercourse in Volume II lacks sexiness, von Trier films the violence committed against Joe with glee. In the scenes where Jamie Bell’s character flogs her, von Trier films her “punishment” in resplendent close-up, not pulling away as the flesh is peeled away from her buttocks. If the sex in Volume I isn’t meant to turn us on, is this violence?

For once, it seemed a female protagonist wouldn’t suffer too horribly at the hands of von Trier, but that changes in the second volume. While Joe doesn’t agonize as much as Gainsbourg’s characters did in Antichrist and Melancholia, we do witness a beating and some pretty horrific sadomasochism. And even though she is the narrator of her own tale, Joe doesn’t come across as a fully-formed character. She is a collection of shocking one-liners and anecdotes, making it difficult to truly care about her plight.

Just like the first part, Joe spends the entire runtime here relating her story to Seligman (Stellan Skarsgård), the virginal pseudo-intellectual who takes a keen interest in her plight. Maybe Seligman is meant to symbolize the prudish moviegoer who longs to live Joe’s life, but only allows himself to experience it vicariously at the cinema. Seligman is much quieter this time, his digressions less witty.

So what exactly is Nymphomaniac? We watch Joe have sex, but von Trier doesn’t want to turn us on. We are supposed to simply accept that she is a nymphomaniac, there is nothing deeper that compels her into the beds of so many. Von Trier has said that Joe and Seligman represent two sides of his personality. But when Seligman attempts to fuck Joe, why does she spurn him? The film is supposedly the final part of the director’s Depression trilogy. Maybe von Trier hates himself so much that even his own sexual side rejects him in the end.