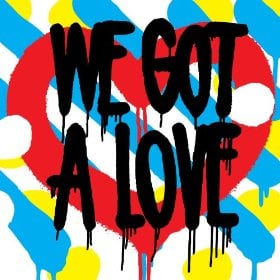 [xrr rating=3.0/5]Marcus Lambkin may call himself Shit Robot, but his act sure comes with some non-shitty attachments. Most notably, he’s got the backing of pal James Murphy and that particular production mastermind’s DFA Records imprint, which should be readily apparent given the reanimated disco saturating Shit Robot’s music. And with sophomore effort, We Got a Love, Lambkin again taps plenty of notable pals for guest spots. On his 2010 debut, From the Cradle to the Rave, he got Hot Chip’s Alexis Taylor, LCD Soundsystem’s Nancy Whang and Juan Maclean on board, to name a few. This go-round, Whang’s back and is joined by the likes of the Rapture’s Luke Jenner and the affable and afro-ed loop-master Reggie Watts.

But do the talented pieces add up to cohesive whole? Sometimes. When it hits, We Got a Love makes for some delicious repurposed electronic dance music that hearkens back to the ‘70s and ‘80s. When it misses, it’s an unnecessary retread that can sound like little more than well-produced filler. Jenner and Watts anchor the album’s two outright home runs. With Watts alternating between breathy whispers and funky falsetto, “We Got a Love” shimmies and shakes, a gooey bass beat and shambling piano plinking looped in such a way that’s it’s obvious the knob-turning guru Watts did more on this track than just sing. Jenner, meanwhile, pulls out his best Barry Gibb on “Feels Real,” a churning bass beat invoking hints of grimy disco that Jenner drives home by hitting the Bee Gees high notes.

Those two highlights are robust and richly textured, the retro overtones vigorously propelling the songs forward rather than pushing them into nostalgic overkill. Less successful is the other Watts track, album opening “The Secret.” That track goes heavy on springing and sproinging effects, so much so that Watts’ own voice is manipulated, warbling out various alterations of the iconic (and overused) This is Spinal Tap line about “going to 11.” In fact, the album as a whole starts off on shaky footing (those aforementioned highlights coming in its latter half). Second track “Dingbat” features Museum of Love (a band fronted by another LCD Soundsystem alum in Pat Mahoney) and while it’s got some head-bobbing bounce, its tinkling effects and ethereal, mostly indecipherable vocals never really congeal into anything worth remembering.

Meanwhile, Whang’s contributions on “Do That Dance” go full retro as, between cheesy outmoded police whistle effects, she sings about disco lights and getting in the mood to dance. And this track is emblematic of the record as a whole: a fun throwback until it wears out its welcome, but with not much new to say. And Shit Robot doesn’t just ape old-school dance music, he unearths actual remnants from the era. Lidell Townsend, who was active in the house-music scene from 1987-1992, adds vocals asking if you know how to “jack your body,” and listeners may as well be wearing neon-rimmed Wayfarer sunglasses.

Are two solid tracks enough to carry an album? Not quite, but the filler is fun enough in a flashback sort of way. Though we may need another modern-day disco-tinged dance album like we need a shit robot, We Got a Love at least manages to be more or less likeable.