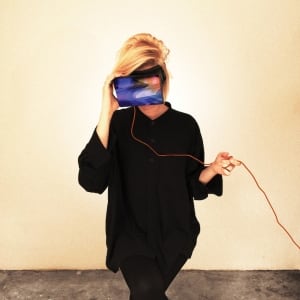 [xrr rating=3.75/5]I’ll admit to being a bit confused about the praise Erika M. Anderson received when she debuted her new project EMA back in 2011. She’s obviously a very talented artist, and I took quite a liking to her work with Gowns, but Past Life Martyred Saints rang slightly hollow. It’s an accomplished record, but it was difficult to shake off the feeling that it wasn’t fearless enough. Anderson’s work on the album was impressive—“The Grey Ship” remains an amazing song even after the hype behind the album died down—but it sounded like well-trodden ground, peddling the same sort of controlled chaos that resonates in the best work from Sonic Youth and early PJ Harvey, among others. Those comparisons seem to be what Anderson is responding to with The Future’s Void, which is arguably the kind of album that Past Life was hyped as being: an assured, confident artist establishing a sound that doesn’t owe everything to her predecessors.

After her distorted breakthrough album, Anderson seems more concerned with clarity over everything else on The Future’s Void. The tape hiss and garbled vocals that seemed to both characterize her and push her into a creative corner are almost entirely gone here; the crispness of the album is quite striking. Breaking away from the monotony of lo-fi recording only really works in Anderson’s favor as it frees her up to concoct interesting arrangements for the collection of songs here. At times, this can be jarring, such as the jump from the stuttering “Satellites” to the far warmer “So Blonde” (which sounds more like good Hole than Hole could ever hope to reach at this point). Mostly, though, it gives Anderson’s songs the right amount of emotional heft.

One can’t help but notice, though, that The Future’s Void is not nearly as concerned with arrangements and song structure as it is with Anderson’s lyrics. The clarity of the production brings focus to what Anderson sees as a big, important lyrical statement. After the lyrical bloodletting of her first album, Anderson’s songwriting has become more withdrawn and more about oversharing, rather than actually oversharing itself. “When She Comes” and “Neuromancer” contain explicit references to social media, while “Satellites” is wrought with tension and paranoia over invasions of one’s privacy. Anderson’s themes here run along similar lines to Savages on last year’s Silence Yourself, but while Jehnny Beth wielded her distaste for social media like a blunt instrument, Anderson approaches the subject with more empathy in personality. Where listeners had previously been told that they should distrust and despise the culture of oversharing, The Future’s Void gives an idea as to why that should be the case.

Through the short existence of EMA, it’s been fairly evident that Erika Anderson is not wanting for ambition, but The Future’s Void finds her mostly fulfilling those lofty goals. There isn’t a song on here that matches the majesty of “The Grey Ship,” but the album is a much more cohesive, unified piece of music that tells us more about who she is than any sort of confessional record ever could. This is how you deal with the hype.

Guided By Voices: Styles We Paid For

Even in the midst of a global pandemic, Guided By Voices haven’t slowed down, and though S…