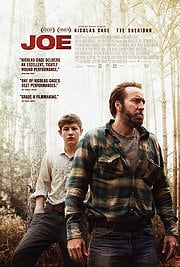 [xrr rating=1.25/5]David Gordon Green at last works his way back into folk-Malick arthouse drama with his latest, Joe. Like Green’s early films, Joe takes place in the rural South and follows a slowly coalescing story through imagistic montages of nature and post-industrial decay. Yet in belatedly returning to the kind of movies many wished he would make again after spending the better part of a decade shepherding comedies on the big and small screen, Green reveals how much he has changed since moving away from this style. Joe hits many of the same beats as George Washington and All the Real Girls, but something is different, and the innocent, cribbed poetry of Green’s youth has now curdled into something more sinister.

Nicolas Cage plays the title character, an ex-con who runs a landscaping business in Texas clearing wild, unprofitable trees from purchased land so that more commercial breeds can be cultivated. Imagine if Cameron Poe from Con Air had simply been made to reintegrate into society without getting to prove himself a hero and you might be close to Joe. The man has arduously clawed out a meagre existence for himself, one predicated on a dedication to physical labor as a displacement for his short fuse. Locals seem to respect and fear him in equal measure, and Joe’s spartan life is etched with borderline-absurd minimalism: rumbling along in a truck several decades past its expiry date, Joe travels a triangular path between his humble abode, his workplace and the cheap brothel he visits when killing trees does not quite get out all of his aggression.

A loner for the good of others, Joe must suddenly shoulder the burden of another human being when he meets Gary (Tye Sheridan), the teenage member of a drifter family who begs Joe for a job and proves himself a hard worker. Gary’s hard life and dedicated ethic makes him a good match for Joe, and their like personalities help keep the narrative focused in that each character’s conflicts are shared by the other, from the scarred psychopath (Ronnie Gene Blevins) who comes to hold grudges against both Joe and Gary, to the violent domestic horror Gary suffers at the hands of his father (Gary Poulter), who resents Joe for showing his son everything his dad is not. These coalescing threads allow Joe and Gary to present a unified front, and Cage and Sheridan display a natural chemistry, but their total similarity renders the play between their personalities inert. At times, Cage almost seems to be doing his Adaptation routine, playing opposite himself, instead of bouncing off another, equally loose performer.

Nothing about this surrogate father story stands out as fresh, but it becomes downright offensive when matched with the mise-en-scène. Green’s early movies roamed around the rusted-over remains of industrial towns and the impoverished characters trapped in these ghost towns, but the fixation on filth and detritus and moral atrophy that characterizes Joe’s direction replaces the curiosity and observation of those films with something closer to exploitation. Hiring Poulter, a real-life homeless alcoholic, to parlay his experience into the role of Gary’s father may charge his more fraught moments with added tragedy, particularly in shots that capture deeper reservoirs of shame and self-revulsion. But the reality of these emotions exposes the hallowed virtue of “authenticity” as corrupt and manipulative, not least for the fact that Poulter died shortly after filming. Nearly everyone else fits Southern stereotypes of being ignorant, reactionary and brutal, interchangeable symbols for poverty. Crumbling houses being reclaimed by nature and littered with indifferently discarded rubbish are lingered upon so that the audience can ask how people could live like this. Green regularly records these sights in beatific montages set to dull, existential monologues, but the Malickian flavor of works past now finds better comparison in the rise of repulsively inviting ad-work that uses the Malick style to sell jeans. Instead of finding the humanity humming underneath dismal surfaces, Joe polishes up its turds for a trash-chic photo shoot.

But what of Cage’s performance, celebrated for reminding people that he can act? This line of thinking says more about the narrow view most have of acting, seeing anything not sufficiently subtle and naturalistic as by definition bad. Not even the most committed fan (or the most bored troll) would argue that Cage delivers all the time, but there is a care in his frenzied outbursts or in the obscure research he did for a role as useless as the Ghost Rider that reveals more thought in outlandishness than many bring to the mediocre, pandering roles that rake in awards. To his credit, however, Cage never lets Joe be one of those characters; for all the character’s subdued energy, Joe offers as much a showcase for his great anger as his most raging roles. The most, and indeed only, compelling moments of Joe are the ones in which Cage allows his fury to rise right up to the surface, only to tamp it down with Herculean effort. The actor may finally get some accolades with this movie for being more reserved, but what Joe demonstrates is something more considerable: that Cage has been in control of his mania this whole time. With this, he simply chooses not to release it.