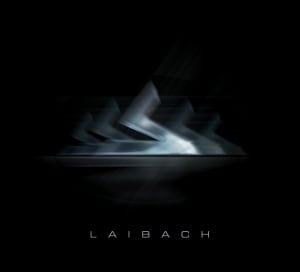 [xrr rating=3.5/5]There’s never been a better time for Laibach to be releasing new music. Truth be told, there’s never a wrong time for this Slovenian industrial dance outfit to be making art. Upheaval is the only constant in this terrifying and wonderful world of ours, providing plenty of fodder for this socio-politically minded group to ruefully comment on.

But over the last decade, the landscape of the world has seemed more chaotic than ever: the collapse of the global economy; the introduction of drones into modern warfare; the new surveillance state; the rise of WikiLeaks, Edward Snowden and Chelsea Manning; Occupy Wall Street; and now the potential escalating of tensions between the U.S., Russia and Ukraine.

All of that and more cast a long shadow on this scintillating collection, with the darkest shades coming as a result of Europe’s tenuous financial and political standing, and how the many citizens of this continent are clamoring for change to no avail. Or as singers Ivo Saliger and Mina Špiler express on the pointed “Eurovision”: “There are crowds in the street that are crying to be heard/ I hear echoes of voices/ They’re trying so hard/ But the ears are kept shut.”

The group is smart enough to know not to add to the dourness of their lyrical themes with severe music. In fact, it almost seems impish of the group to have the songs be this danceable and engaging. What better way to sell a line like “Liver, liver, liver/ We’ve got to eat the liver” than with a clattering drum machine and synth bounce that sounds like an angry rewrite of Toni Basil’s “Mickey”? The album also opens up with a stirring ode to “The Whistleblowers” that turns from a winking take on the theme from The Bridge on the River Kwai into a rousing fist-pumper and back again. All the better to swallow the bitter tang of the messages within.

What cuts through most clearly on this album is a surprising tone of hope, something that has been slowly creeping into Laibach’s work since their 2006 opus Volk. On that album—a reworking of national anthems from all the industrialized countries of the world—the group tried to find the good in all the bullshit surrounding the troubled history of these countries.

With Spectre, the effort is to rouse listeners to action, while also providing some reassurance to those willing to fight the good fight. On the pointedly titled “Koran,” Špiler sings sweetly of a belief in “brotherhood, equality and freedom,” and this is about as hopeful a notion as you’ll ever hear on a Laibach album.

This less-than-subtle approach could really be this band’s undoing. Unless you’re really in the mood for an industrial-tinged rock record like this, Spectre can be wearing on the system. But Laibach has always been a take-it-or-leave-it band. They’re unapologetic in their politics and the hardnosed line they take with their music. You have to take them at face value or you’re likely never going to get on board. Really, there’s no better time to try and connect with this group than now, and no better album to do it with than Spectre.

Anderson’s movies are so infinitely re-watchable. …