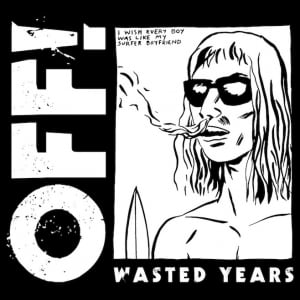 [xrr rating=2.0/5]Like an experiment in built-in obsolescence, OFF! presents its listeners with an interesting question on Wasted Years: why the hell are you listening to this when, at literally any other point in its members’ discographies, you could find an identical, better record? You can call it a paean to when hardcore was stupider, when in order to mosh you didn’t have to think about more than one kind of drum beat or memorize more than 10 words of lyrics. Either way, it’s annoying, forgettable, and worst, easily replaceable.

OFF! represents perhaps the worst example of genre stagnation, so endlessly referential it actually refers to itself on more than one occasion. Keith Morris never had a particularly wide vocal range, preferring simple, barked attacks when in Black Flag and later Circle Jerks. He evidently sees no reason to update that approach, as, minus a bit of wear, his approach sounds identical, curled upper lip and all. Unfortunately for him, audiences have the benefit of several decades of new hardcore to compare his style to, and while his croaks may be classic, they’re also stale. There is no excitement here, no potential. You know exactly how every song will go right from the start.

Guitarist Dmitri Coats can be blamed for most of this, trying his best to approximate greats like Greg Ginn without their sense of invention or imagination. Can’t tell “Red White and Black” apart from “Exorcised” or “I Won’t Be a Casualty”? That’s on Coats, though Steven McDonald and Mario Rubalcaba don’t particularly vary things on bass and drums, respectively. Worse, compare these songs to the early Black Flag gems Morris sang on, and the stagnation becomes even more obvious. This kind of hero worship can be expected from 15-year-old skate punks, but coming from the heroes themselves, it’s just pathetic.

Of course, if the hardcore scene didn’t expect so little of its legends, maybe it wouldn’t be left with OFF!’s cynical exploitation of their fandom. So many were up in arms about Black Flag’s reunion and Ginn producing new music, but at least What The tried. If your brand-new, 2014 album can be easily replaced by demos from the late ‘70s, your band has a problem. OFF! has that problem, beyond a doubt. Keith, it might be helpful to read some of your own lyrics: “You’re a living punchline/ And the joke is on you.”