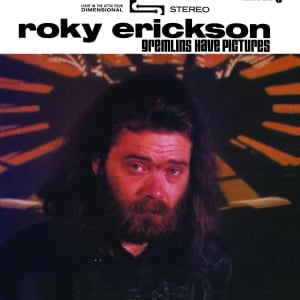 It wasn’t until the latter part of 2013 that I started to turn my attentions to the dense discography of troubled singer/songwriter Roky Erickson. Like many fans of horror-themes and dusty psyche-rock, I had heard “Night Of The Vampire”, “Cold Night For Alligators” and Velvet Underground-cover “Heroin” on numerous mixtapes, and courtesy of many late-night college radio disc-jockeys, but it wasn’t until after watching Erickson open up for the Black Angels during their recent nationwide tour that I really sat down with 1986’s Gremlins Have Pictures. That night I took in the sites of a beleaguered body, Erickson spending most of the night missing chords and being reminded by his backing-band to connect with the audience. While it was often difficult to take in the site, most of the crowd was just appreciative that Erickson was still alive.

For Gremlins, and his solo predecessors The Evil One and Don’t Slander Me were composed by a man pushing the very edges of sanity (he was hospitalized for schizophrenic paranoia just a short time later), and that would subsequently be taken advantage of multiple times during his legendary career due to mental and financial issues. While the other two albums might have arrived ahead of Gremlins Have Pictures, this 16-track release was constructed from both studio and live recording plus select studio out-takes, and thus truly showcases the tumultuous 1980s that helped Erickson develop a cult-like following.

As the leader of 13th Floor Elevators, Erickson helped define American psychedelic music of the 1960s; that aesthetic would never truly leave Erickson, even as he lost his grip on reality. Landing at the tail end of the album, “I’m A Demon” and “The Beast” are rife with self-hate and 1960s nostalgia, listening like they were combed from a dilapidated diner jukebox just for this collection. For Erickson is the most effective when unplugged from his electronic fuzz. “John Lawman” is a raucous live banger planted at track four; however, it’s surround acoustic tracks “Song To Abe Lincoln” and “Anthem (I Promise)” that lure listeners deeper into Erickson’s extended tale of sorrow.

It’s later in the album that Erickson’s then-ongoing departure from reality is most manifested in the stream-of-consciousness lyricism. “I Have Always Been Here Before” and “Before In The Beginning” each shed light on Erickson’s schizophrenia and loss and disassociation with standard timeline of life. After verses about love and the importance of femininity on mankind, Erickson slips into his obsession with Satan: “From the gargoyles to Stonehenge/ From the sphynx to the pyramids/ Lucifer’s temples praising the devil right/ To the devil’s clock as it strikes midnight. And as the album progresses, Erickson only focuses more on that dark temple, transitioning into the minimalist “Burn The Flames” and the aforementioned “I’m A Demon” and “The Beast.”

Years before the idea of “Behind The Music,” Gremlins Have Pictures is a candid reflection of Erickson’s tumultuous 1980s — a decade he fortunately managed to survive. He may no longer have the visceral punch of his earlier self, trading that stamina for a deep reservoir of hard earned wisdom. As this form of raw-rock continues to gain traction across nostalgic millennials, new artists and fans need to look back toward Erickson to see how powerful, and dangerous, earnest songwriting can be.