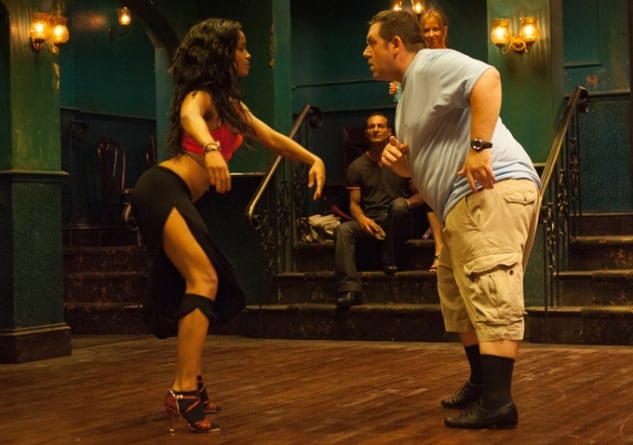 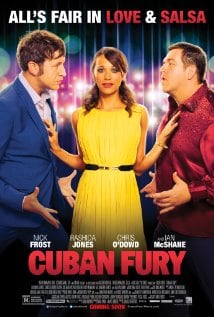 Whether you will find Cuban Fury funny largely depends on one simple question: do you find the thought of a portly, 40-something Englishman salsa dancing to be inherently amusing? There’s an inherent danger in the premise of the film; are we meant to be laughing at Bruce (Nick Frost) or with him? The opening monologue acts as something of an information dump, revealing that Bruce was once a salsa dancing child prodigy, winning nearly every British championship with his sister Sam (Olivia Colman), until a savage beating at the hand of some chauvs caused him to give up the dance and grow up to be a mild-mannered salesman at a lathe company.
Cuban Fury makes it explicitly clear that Bruce is an instinctively talented dancer, blessed with what his mentor Ron Parfitt (Ian McShane) calls “corazone” in an exaggerated Catalan accent. But would the movie be funny if the contrast between Frost’s schlubbiness and the sensuality of Latin dance was not so extreme?

Almost certainly not. But Cuban Fury is largely saved from cringe comedy (particularly in its first act) by the charm of its star, rather than its premise. While Frost has largely been cast in the sidekick role in Edgar Wright’s Cornetto Trilogy, he appears to have fully matured into leading man status. The actual plot of Cuban Fury never really tries to be anything more than a standard rom-com, being that Bruce has to A) learn to love himself for who he really is and B) defeat his office nemesis (Chris O’Dowd) and thus C) win the affections of the girl out of his league (Rashida Jones). But perhaps that’s for the best. While the central story is relatively straightforward, it’s burdened down with an excessive number of subplots, including Bruce’s small circle of equally schlubby friends, his bonding with a flamboyant dancer named Bejan (Kayvan Novak), his relationship with his grown sister, his relationship with his estranged mentor and then various office politics. After a while, it starts to feel a bit exhausting, in part because no one plot thread has enough time to really set in before another starts encroaching on the screentime.

Despite that (or maybe because of it), the movie works best in the smaller moments. Cuban Fury has a ringer of a cast and utilizes them well, with each primary player getting just enough attention to make an impression. In particular, O’Dowd plays brilliantly against type as the macho office d-bag; while Bridesmaids and “The IT Crowd” displayed him as an awkward nerd, he absolutely crushes it as a swaggering alpha male. Jones manages to make the best of a character that can be summed up as “moderately awkward attractive lady” and while Novak’s performance barely balances on the line of camp, the sheer ridiculousness of his role pulls it off. Only McShane phones it in, turning in a generic hardass role that doesn’t involve a single dance step.

Director James Griffiths and screenwriter Jon Brown (Frost has an “original idea” credit) are both TV veterans, working on their first feature with Cuban Fury. It shows. While their editing style initially takes its lead (understandably from Edgar Wright’s staccato, high-energy style, they eventually come into their own with several fluid dance scenes (including one absurdly extended dance-off between Frost and O’Dowd). If they learn how to ditch some of the subplots, they’ll have a fine future ahead of them, particularly with performers as bashfully charming as their lead.