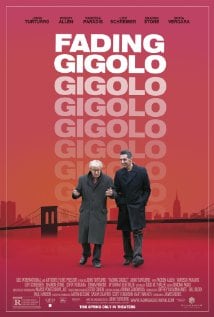 [xrr rating=2.0/5]Fading Gigolo is notable for placing Woody Allen in an acting role for the first time outside one of his own films (and discounting appearances as himself), since 2000’s Picking Up the Pieces. Yet just as Allen’s character, Murray, dictates much of the path of the protagonist Fioravante (John Turturro), so too does Allen the filmmaker hang at the edge of Turturro’s direction, clearly influencing the style. A soundtrack of light jazz and golden-hued cinematography has late-Allen written all over it, and the premise of the film, along with its dry but dirty humor, suggests Turturro cast Allen as his means of paying royalties.

Allen’s Murray sets the film in motion when his rare and used bookstore closes. Seeking extra income for both himself and loyal friend and now ex-employee Fioravante, Murray capitalizes upon a conversation he had with a friend, Dr. Parker (Sharon Stone), about her desire for a threesome by offering Fioravante as an escort. This comes as news to Fioravante, who puts up mild objections before acquiescing to see Parker for a “test drive” because, hey, have you checked New York rental prices lately? The shy man turns out to be such a natural that, soon, montages of wealthy, unfulfilled, middle-aged women flit past in various stages of arousal and ecstasy. By placing a man in this situation, the film makes prostitution more of a dream job and also the subject of gentle, sympathetic humor that never seems to extend to any cinematic depictions of women who go into the same profession.

Things go so well for Fioravante that no drama inherently arises from his career shift, so conflict must instead be generated by the sudden collision of his new life with Hasidic Judaism. Yeah, you read that right: Murray tries to cheer up a depressed widow, Avigail (Vanessa Paradis), in his orthodox neighborhood by having Fioravante visit her. Just as a masseuse, mind you, but given the religious rules bound up in so much as touching a woman who is not one’s wife, he might as well be giving her the full service. Of course the two start to fall for each other, and that chafes with the local Hasidic cop (Liev Schreiber) who’s had the hots for the woman since they were young. But even this fails to add a spark to the film, and considering that Schreiber’s cop abducts people and threatens violence to make sure no one takes Avigail from him, it’s surprising that this predatory, possessive near-stalker doesn’t feel more dangerous.

Fading Gigolo is so functional in every respect that it cannot hope to do justice to any one of its thorny subjects, much less follow through on its blend of sexual exploration, late-capitalist commentary, religious conservatism and just plain romantic comedy. There are a handful of moments that briefly grab attention, such as Murray reassuring Fioravante that he’ll be a hit with the ladies because the handyman is “disgusting in a very positive way,” or a medium close-up of Parker gently crying with nervousness when Fioravante comes over for the first time. But the rest of the movie struggles so hard to treat two taboo subjects as inoffensively as possible that it doesn’t realize that to succeed at this task is to fail to create a meaningful film. As a character actor, Turturro uses his modest, unassuming appearance and huffy calm as a smokescreen that masks a capacity for volcanic emotional outbursts; as a filmmaker, he could use some more of that energy smashing through his unperturbed visual surfaces.