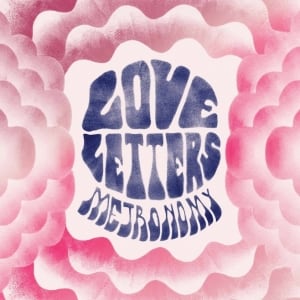 [xrr rating=3.0/5]The arm of Joseph Mount’s metronome has swung back away from the sunny beats and expansive instrumentation that defined his band’s previous release, a record that was heaped with acclaim. The English Riviera evoked breezy, sun-drenched beachfronts. The record’s tight composition, crisp execution and deliberate beats particularly struck a chord in the band’s native UK, where many critics lauded it as one of 2011’s best albums. And just as that LP full of ocean-sprayed good vibrations was a dramatic departure from its two glow stick-friendly predecessors (from a band known to strap push-lights to their chests during live shows), Love Letters arrives as yet another tonal shift. In place of sleek and glossy, we’ve got throwback and lo-fi, thanks to being cut at London’s famed analogue recording studio Toe Rag.

While in the past, Metronomy’s changes of pace coincided with additions and subtractions to their lineup, not so with Love Letters, which still sees multi-instrumentalist Oscar Cash, drummer Anna Prior and bassist Olugbenga Adelekan joining Mount. The record’s shift away from the shore and into the mangroves serves as a stylistic choice not altogether original, and not altogether successful either, but Mount has proven that he and his band are nothing if not intrepid. For those already well-versed in Metronomy, Love Letters may prove jarring upon first listen, but the stripped down production value works well enough that newcomers may be more easily hooked.

Early highlight “Monstrous” puts the pared back approach front and center with a catchy little harpsichord ditty joining the slightest of percussion. There’s a medieval feel to that instrument, even though the song lyrics themselves (though delivered through pleading vocals) end up more melodramatic. “Month of Sundays” is equally gentle, but with more traditional 4-piece instruments, pulling from ‘60s influences like the Beatles and Kinks (not unlike what Foxygen has been doing lately) with a liberal dose of Fleetwood Mac in the chorus. Mount’s vocals on this record clearly shoot for tender and vulnerable but end up more often seeming needlessly brittle. Sometimes this works, other times not so much.

“The Upsetter” features these frail vocals too prominently, opening the album with Mount offering up hints of a meeker David Bowie over a simple Napoleon Dynamite Casio beat. “I’m Aquarius,” meanwhile, has a far more seductive undercurrent, with skittering drums and Anna Prior shoop-a-dooping in the chorus as Mount repeats “You’re a Taurus/ I’m Aquarius” throughout long stretches. And the title track features mournfully muted horns that suddenly blow up into a piano-key slamming romp fueled with Prior and Mount alternately belting out vocals with far more passion than is found elsewhere.

The tail end of the album remains catchy, channeling plenty of retro ‘60s British influences , but it’s also bereft of any true standouts (the emotive “The Most Immaculate Haircut” comes closest). Upon repeated listens the record stands up remarkably well as a whole, though few tracks on the album would make many waves as standalones on a mixtape. Disciples of The English Riviera may bristle at this drastic shift in fidelity, but Metronomy clearly establishes with Love Letters that they’re willing to put it all on the line in the name of creative expression.