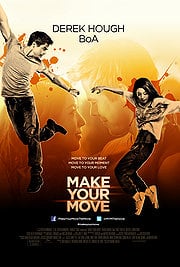 [xrr rating=1.5/5]A clip reel of reaction shots from Make Your Move would neatly summarize what audiences are supposed to take away from the movie. Influential New York dance producer Camille Young (Mary Ashton) nods her head and cracks a smile at fresh new talent; dancer/parole violator Donny (Derek Hough) stares in awe at Aya (K-pop star BoA) and her Korean hip-hop dance group. But there’s a problem. The dance routines that are supposed to inspire these aggressively coached reactions are thoroughly pedestrian street-corner moves. I imagine first-time director Duane Adler desperately offering guidance to his young charges: “Ok, now, Derek, look interested!” It’s a lot to ask of any actor, and the cast of Make Your Move are unable to achieve the feigned astonishment that would be required for their nearly two-hour adventure to have any kind of momentum.

Make Your Move is stepchild to the Step Up franchise, the fifth installment of which is due in theaters this summer. Writer-director Adler wrote the screenplay for the 2006 film, which provided a breakout role for the now ubiquitous Channing Tatum, who carried a moderately entertaining tale of class-conscious romance, underdogs and young people chasing after terpsichorean dreams.

I love musicals, and I’ve seen two of the three Step Up sequels. But I don’t go for the dancing, which hasn’t been any good since the first movie. I keep returning to the series in the hopes of bearing witness to youthful enthusiasm and idealism, of recognizing the awkward feeling of self-discovery in young people finding their voices through their bodies. There are moments of this in the first Step Up, but that movie’s relative grit has long since been overwhelmed by slick overproduction, even in the inventive Step Up Revolution.

Make Your Move is somehow both more of the same and less. It’s lack of sparks on the dance floor are matched by the sense of alienation when the dancing stops. Donny and Aya are written as an interracial Romeo and Juliet, their respective clans at war over some incomprehensible conflict between New York dance clubs, as if there can be only one in town. The actors’ lack of emotional connection is deadly. I can’t speak to BoA’s talents as a singer, but as an actress, her voice and face are inexpressive to the point that her glances at Hough during a dinner date read like the glares of an indifferent, uncomprehending stranger.

I have to keep reminding myself that Make Your Move is somebody’s vision. Not just Duane Adler’s, but the vision of myriad performers and choreographers who dedicate their lives to dance and hours upon hours of rehearsal. Where is that effort and imagination on screen? Aya’s dance group Cobu, whose numbers act as a catalyst among the film’s rival factions, are a baggy pants-wearing Korean hip-hop conglomerate who beat a few bars on the drums before pointing their oversized sticks at the audience in a barely athletic, minimalist version of Stomp! There’s a lack of articulation in Hough’s moves, his tap-dancing shuffles unimaginative and not particularly demanding. That none of the dancing makes an impression is a sad state of affairs. One of the most infamous dance movies is 1983’s sequel to Saturday Night Fever, Staying Alive, whose centerpiece was a gaudy, horrific production called “Satan’s Alley.” But I would have paid cash money to see something like that misguided spectacle in Make Your Move, as it was more inventive in its ridiculousness than anything the new movie offers.

There’s a mildly diverting visual mid-way through Make Your Move as Donny courts Aya through a series of text messages displayed on screen as roaming subtitles. I really wanted them to text each other avatars of a cat taking a bath, or a cat and a dog dancing together, but it was not to be. These shots of two young people looking at their phones and smiling could be the basis for a series of Downfall-like parodies, except it will be a riff on a film that hardly anybody has seen, and neither of them is Hitler. A climactic sequence where Donny gets all his friends together to put on a show—because that’s the kind of movie this is! – was a missed opportunity to fill the screen with a flurry of text messages and cat icons, and thus it was one more move the movie didn’t make. A dance movie that fails to deliver in its field of expertise, Make Your Move simply doesn’t.