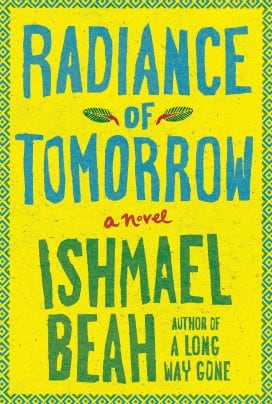 [xrr rating=4.0/5]Ishmael Beah’s memoir A Long Way Gone about his experiences as a child soldier in Sierra Leone during the brutal civil war that stretched from 1991 to 2002 deserves a place alongside the best war memoirs ever written. His latest novel Radiance of Tomorrow marks Beah’s first foray into fiction and sees him return to a war-torn Sierra Leone. This time, however, Beah addresses the problems of returning to a village once evacuated and the process of rebuilding one’s life, family and town. Drawing on the decidedly poetic lyricism of his native language, Mende, overflowing with vivid metaphors and animated phrasings, Radiance of Tomorrow is filled with quietly brilliant insights into the nature of human life and the world at large. It is clear that Beah has lost none of his ability to present life in its most dire state.

The central story revolves around several families from the small village of Imperi in the southern region of Sierra Leone. One by one, families return after the end of the civil war that tore apart the country and cost many people life and limb. Beah switches between several characters throughout the novel, each with a different experience of the war and revealing a new aspect of the town’s rebirth – from the opening chapters which focus on elders Mama Kadie and Pa Moiwa who sift through the blackened wreckage of Imperi and provide proper burials for the dead to Colonel, a former child soldier now homeless and rootless. The influence of Beah’s personal experience and A Long Way Gone shines through in the character of Colonel who, although forced to cut off the hands of the villager Sila and his children, desperately wants to make Imperi his home.

Radiance of Tomorrow truly excels is in its depiction of a town and its people putting their pasts behind them in order to forge a better future. Bockarie and Benjamin, the committed primary school teachers drawn back to their hometown in hopes of making a better life for their families, provide central guiding voices in this narrative. Through their experiences as teachers at the newly reestablished primary school and later at the reopened rutile mining company, we see firsthand the effect charities and foreign opportunists have on a healing country. After much effort, Imperi becomes, considering its circumstances, a thriving village once again. But Imperi’s rise is systematically countered by corruption and negligence.

And that’s what makes Beah’s first work of fiction surpass other cheery homecoming tales of rebirth. He paints a picture of a desecrated Imperi, its people murdered and its building razed to the ground. But the efforts of those who dared to return and rebuild bring life back into the village. Children go back to school, houses are painted colorfully and fresh fruits are sold by the roadside. But just as Imperi seems to beat the odds and thrive again, the children are told they cannot attend school without the proper (and expensive) uniforms, and the mining company opens its doors again, attracting the men away from their jobs to much more dangerous ones. Manifesting its cancerous effect on the town, the mining runoff poisons the river, killing the fish and depleting the village’s food supply.

Recalling Thomas Wolfe’s iteration that you can’t go home again, Beah presents not only a story of homecoming but also a story of rebirth followed by destruction yet again. Imperi’s first death at the hands of civil war was traumatic, but this second destruction played out in Radiance of Tomorrow hits on a real problem throughout much of the world – postwar corruption. This is a subtler, systemic destroyer, and Beah’s characters bear the brunt of it here but not without their fair share of stubborn resistance. Even if Imperi’s villagers flee their hometown once again in search of a brighter future at the end of Radiance of Tomorrow, they do so with the strength of conviction of a people intent on survival, and their story reads as an allegory of the challenges hindering rebirth and growth in villages and nations around the world. Beah is an author with twofold appeal – an incomparable grasp of human emotion and an intrinsic understanding of the complexities of the world.