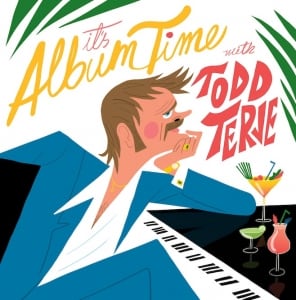 [xrr rating=4.0/5]Todd Terje’s It’s Album Time begins with a synth line that I imagine blaring over a PA as lasers pierce the darkness of a smoke-filled club for fans awaiting their Norwegian disco god. Yes, Norwegian cosmic disco is a scene, and Terje is its star practitioner. Producer Terje Olsen took his nom de vinyl in homage to Chicago house producer Todd Terry, but this inventive DJ-producer hasn’t stuck to one pseudonym, or to one dance genre. His work has also appeared under names like Tangoterje, Chuck Norris, Pitbullterje and Wade Nichols, that last one an homage to porno stud/daytime soap hunk/disco singer Dennis Parker, who happens to resemble the hirsute cartoon version of Terje that graces his album covers.

Terje cut his dance floor teeth with propulsive remixes of the usual suspects like Michael Jackson, Chic and KC and the Sunshine Band, all of whose influences you can hear on his first full-length album of original work. But his eclectic tastes show in remixes of MOR staples America and boogie band Canned Heat. Terje’s music is familiar, his musical hunger affectionate and ravenous enough that he doesn’t stay in place for long, and neither will your feet.

The high-pitched, rippling electronic keyboard solo that introduces Todd Terje’s It’s Album Time expands to a full-blown dance band for a two-minute anthem that sets the scene for a revisionist, hedonistic (mostly) instrumental dance album. A chorus chants “Album time, album time, album time,” which in my America-centric hearing impairment I mistook for “apple pie, apple pie, apple pie.” We’re both right. This is a wholesome, sugary treat, comfort food for the dance floor and packaged in a crisscross lattice crust—or, at least if you buy the vinyl edition, something shaped like a pie.

It’s Album Time comes off like this year’s Random Access Memories, but better. I don’t foresee Grammys in Terje’s immediate future, but this album gives me more pleasure than Daft Punk’s award winner, and it even has its own high-profile cameo from a ’70s pop icon.

A whispery Bryan Ferry, now 68 and making like Walter Huston as Lothario, takes the lead on a mournful “Johnny and Mary.” It’s a dramatic recasting of what was an uptempo track by Robert Palmer. The song’s title echoes the old standard “Frankie and Johnny,” best known as a musical cue for prostitution in Looney Tunes shorts. But as suits the aging Romeo performing it, the song’s spare, dirge-like arrangement has an autumnal, melancholy air that gets at the desperation in its lyrics: “Johnny’s always running around/ Trying to find/ Certainty.”

Terje flavors his disco withe bossa nova in tracks like “Strandbar” and “Alfonso Muskedunder,” which sounds like Brazilian library music from a ‘70s action movie. “Svensk Sås” begins with a shimmering synthesizer that would be right at home on a Human League album, but the track evolves into a Quincy Jones-ish funk, then a piano-driven house beat. It’s hard to describe Terje without playing “name that influence,” but even though you can hear ancestors in his music, the effect is like a concentrated DJ set folded into a single, vibrant disco single.

Like a good DJ, Terje sequences his album with peaks and valleys, and he saves the best for last. “Inspector Norse” was a popular 2012 single, and you can hear why—an epic idyll among synth pop instrumentals, its percussively lilting riff picking up sweet keyboard textures and the sounds of the sea, a danceable travelogue in six minutes like a vacation slideshow.

What sets It’s Album Time apart from other IDM is the melodic and rhythmic shifts, sometimes within the same track. Terje’s remixes were often spare, like the beats and bass he added to America’s “A Horse with No Name.” His remix of M’s “Pop Musik” proves his disco has good taste: he holds off on Robin Scott’s obnoxious vocal for several minutes, and concentrates on building a minimal, propulsive beat and a new melody. It’s dance music as transformation. Sometimes It’s Album Time sounds like a good thrift store disco score, and that’s not a bad thing. Legend has it that a Norwegian radio station banned “Inspector Norse” because it sounded like elevator music. Terje modestly admitted to Factmag, “I also think it sounds like elevator music. Good, danceable elevator music though. Elevate your body!” Dance music fans of all eras will want to get on that elevator.