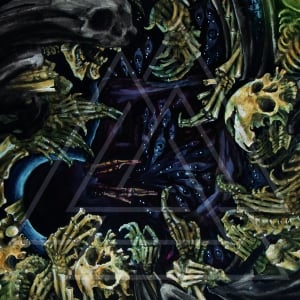 [xrr rating=2.5/5]Several years in the making, III: Beneath Trident’s Tomb arrives at a moment both advantageous and inopportune. Black metal as a genre has been rising in critical acceptance since about 2010, and the release of Deafheaven’s Sunbather has opened up the genre to exponentially larger audiences. Not that Twilight doesn’t possess its own crossover potential: much has been made of Thurston Moore’s contributions to the record, and rightly so, as his guitar spits lacerating noise all over III. But as many have predicted, all of this exposure is leading to another, less enviable point, namely an overflow of mediocre coattail-riding bands without an original thought in their heads into the black metal arena. We are approaching critical mass and a velocity faster than the speed of light.

In theory, this should not impact Twilight. A long-running metal supergroup that in the past included names like Blake Judd of Nachmystium and Malefic of Xasthur (which reminds me, I need to get my D&D group back together), Twilight has operated on the border between black metal, doom and industrial noise for some time now. III, with an assist from Moore, displays all of this, sometimes in tight form. Opener “Lungs” crests along on a jackhammer beat and the Dirty-era dissonance with about five vocalists screeching overtop. In its own way, the song is fun. “Swarming Funeral Mass” slows things down for twisted harmonic intro that gives way to a titanic wall of noise, percussion with a sound like rotating drills chirping in the background. It’s all pretty cool.

Until suddenly it isn’t. Even at a tight six songs and 42 minutes, III drags, hard. “Funeral Mass” begins interestingly but goes nowhere and “Seek No Shelter, Fevered Ones” starts in standard sludge mode and later transitions to a style of hardcore-flavored black metal that somehow doesn’t improve the track. All of Thurston’s noise, by this point, starts to grate, and you begin to wish for something, anything, to hang onto. What once felt exciting and revolutionary by the end is just a tired trick. And if you’re like me, you’ll have no interest in letting the record start over again.

There’s a reason for this: in such a glutted genre, the alternatives are potentially endless, and with so much groundbreaking work being done, why bother with a record you’ll listen to once and forget about? In the hermetic world of its creators, III might well have felt revolutionary, but outside them whole orders were born and died and born again. It’s a shame that these undeniable masters of form come off like imitators, but there’s just no other way to put it.