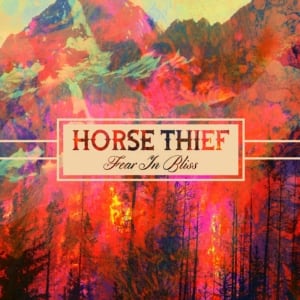 [xrr rating=3.5/5]“We will not last forever/ But I don’t mind,” Cameron Neal sings in the refrain of “I Don’t Mind,” the first true song on Horse Thief’s debut LP, Fear in Bliss. It’s a statement that succinctly establishes the record’s theme, that of shrugging off the dread of fatalism in favor of embracing the finite and the liberation it affords. Throughout the piece, there is a sense of confronting some darkness, but having the maturity to recognize that it too is fleeting. The narrators here, for the most part, observe the dour and let it pass them by, rather than getting hung up on it.

To convey this sense of growth, the quintet of Oklahoma City transplants — originally from Denton, Texas — uses their plugged-in alt-country folk to paint a scene of a springtime dusk, with the feeling of squinting at the sun with an inexplicable smile on your face. “Devil,” arguably the best song of the bunch, encapsulates this dichotomy of a tranquil or insouciant quality in the face of what are typically anxiety-causing realizations, Neal singing in his high warble, “It’s getting better every day now/ But we all are gonna die sometime/ But I still sleep at night.” Breezy and infectious, it’s carried by driving drums and chrome-veneered guitars, components that define most of the tunes.

The aforementioned “I Don’t Mind” opens the record following a 31-second instrumental intro, starting with a crystalline guitar melody reminiscent of Radiohead’s “Let Down.” It is quickly joined by shuffling drums and prodigious riffs, augmented by piano twinkling that adds an element of whimsy. Spouting indifference, Neal expresses the solace found in life’s expiration date, echoed again in the centerpiece “Already Dead.” Lovelorn with a rustic sweep and a faint background haze, the song musically is your standard solo acoustic ditty, the focus again being on the lyrics of “When you’re born/ You’re already dead,” sung in lush harmonies, the ending arriving on an a capella delivery as birds chirp around the voices. Ending the album’s first side on a high note, the album gets more consistent from here on, as its first half largely features redundant tracks sandwiched between highlights (“Human Geographer” and “Holding On” being not bad, but clear valleys among the peaks).

Side two sees things get more interesting with some harder edge to it. “Little Dust” has a serpentine rhythm and sexy groove, with Neal also injecting more venom in his vocals. The escalating tempo and heightened force with which the drums are pounded bolsters the frontman’s indignation. “Dead Drum” then has a rollicking, devil-may-care swagger to it, a confidence earned from the previous tracks’ self-discovery. The two closing numbers compose the quirkiest aspect of the record, the first of which, “Come On,” amounts to two distinct songs. About the 3:05 mark, it changes both musically and lyrically, with very little transition, making for a jarring result. It sweeps along for another two minutes before abruptly ending altogether, and leaves you wondering if this second section was tacked on because it wasn’t strong enough to stand on its own. The true closer, “Warm Regards,” is unlike anything else on the album. Stark with droning keys, Neal’s echoing voice intones plaintive, standalone observations, indiscernible chatter in the background magnifying the narrator’s isolation. It’s odd to end the record on such a gloomy note in light of the development that came before it. Perhaps that’s why the comparatively optimistic “Stop” was added as a bonus song, with the designation that it is indeed separate from the album proper.

With all the components considered, Fear in Bliss is a largely cohesive document. Neal has said the overarching theme of the record is “finding yourself and what you believe in, and finding the comfort in acknowledging fear.” There are some deviations from this course, but by and large, the destination of this concept is achieved in compelling fashion.