First announced the year after his critical and commercial hit American Graffiti (1973), George Lucas’ take on 1930s screwball comedies and murder mysteries wouldn’t become a reality for over two decades. Changing priorities and the smash success of Star Wars (1977) caused Lucas to shelve the project that would become Radioland Murders until 1994. Even then, he seemingly only revived the idea because he needed a film to showcase his new computer-generated technology. Interviews and press conferences with Lucas all took the same tack, first briefly praising Mel Smith, chosen as director for Radioland Murders after his success with The Tall Guy (1989), then launching into a self-satisfied description of the money-saving qualities of CGI — “you don’t have to pay [computer animators] movie star salaries” he boasted in one press conference — all followed by his assurances that he had, indeed, just revolutionized the entire film industry.

That Radioland Murders has some spectacular effects is not under debate, nor is its place in history as one of the earliest films to make extensive use of CGI, not just for the stunning overhead and exterior shots, but complicated interiors as well. What is a matter of debate is the degree to which Lucas’ grandstanding affected the film’s reception. With the technology still in its infancy, bragging about how easy it was to insert actors into computer-generated scenes was a bad idea when the end product in Radioland Murders often looked like some very clumsy, old-fashioned bluescreen work. The critics were harsh, the audiences were unimpressed, and hard feelings lingered for decades; in 2010, director Smith, still stinging from the critical drubbing Radioland Murders received, claimed Lucas remained so obsessed with CGI he was now trying to digitally insert long-gone actors into new films, a claim Lucas was compelled to vigorously and quickly deny.

At its heart, Radioland Murders is a big, goofy comedy, unapologetically self-referential and content to exist purely in the realm of entertainment, thus entirely unsuited to cope with the massive heap of baggage it was saddled with, courtesy Lucas’ braggadocio. Released during a brief moment when comedies from Hollywood’s Golden Age made a comeback, Radioland Murders borrowed freely from a host of both classic and lesser-known films, as well as old-time radio shows. Scads of cinematic influences are evident, from James Whale to the Three Stooges to Howard Hawks, scenes and characters and costumes borrowed from dozens of films, all in homage to what many consider the quintessential Good Old Days.

Radioland Murders opens on a night in 1939 when Chicago radio station WBN is preparing to go national in a bid to become a new major network. As secretary and secret brains behind the outfit Penny (Mary Stuart Masterson) rushes to get the station ready, chronically-flaky scriptwriter Roger (Brian Benben), her estranged husband, desperately tries to win her back. When the broadcast begins, however, a disembodied voice cuts in with spooky rhymes, and moments later, a member of the crew is found murdered. As the bodies pile up, police investigator Cross (Michael Lerner) begins to suspect Roger of the crimes.

Sporting an impressive roster of big names, celebrated character actors and aging stars from yesteryear, Radioland Murders cranks up the already-madcap pace of 1930s screwball comedies way past 11. The frenetic rhythm is likely off-putting to a classic film buff; comedy shorts of the era may have been joke-a-second affairs, but feature length films that attempted such a velocity, such as Arsenic and Old Lace (1944) or the truly bizarre Sh! The Octopus (1937), rarely fared well with audiences. The unrelenting pace of Radioland Murders stops only for the briefest of pauses, usually reaction shots courtesy WBN’s young page Billy (Scott Michael Campbell). The prevailing philosophy of Radioland Murders dates back to Vaudeville days: If you don’t like that joke, here’s another one, and another one, and another. 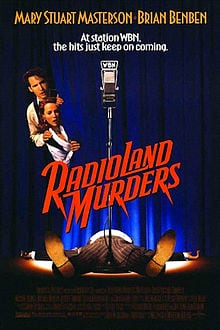 It’s not a sophisticated comedy, but what so many seemed to forget on its release is that it was never meant to be. Radioland Murders is lowbrow humor for the sake of a laugh, a film as quick and cheap as the scripts churned out by WBN’s dysfunctional staff writers. Filled with short, subtle moments — a dimwitted policeman ducking inappropriately, a two-word howler from Bobcat Goldthwaite, a delightful cameo by renowned voice actor Gary Anthony Williams — Radioland Murders doesn’t wait for you to catch up. It’s a film that says hey, if you didn’t get the joke, too bad, but here’s another joke to make you forget the one you missed. This all seemed too much for some distressed critics, such as Washington Post’s Desson Howe, who issued this honest, heartfelt lament: “Benben dresses up as Carmen Miranda, then a penguin.”

Radioland Murders, borne in a world before Turner Classic Movies and YouTube, is, if nothing else, impressive simply for the sheer volume of callbacks from obscure films. The character of Billy is right out of Best Foot Forward (1943), the plot is pure Murder at the Vanities (1934), and if Roger hanging off the side of a building from the station’s call letters wasn’t inspired by an equally impressive scene from The Horn Blows at Midnight (1945), this humble critic will buy a hat, and then eat it.

After one hell of a ride, Radioland Murders crashes in the final laps. Though the film is based on murder mysteries and comedies of the 1930s and ’40s, the finale, unfortunately, is more closely based on the tepid resolutions of studio programmers. These films weren’t strictly comedies, but rather lighter dramatic stories with supporting players providing comic relief. These sidekicks, played by character greats such as Roscoe Karns, Ned Sparks and Allen Jenkins, frequently solved whatever conflict was at the heart of the film, sometimes accidentally. Done well, it was a delight to watch; done poorly, and all audiences could do was cringe.

Unfortunately, in Radioland Murders, it’s a cringe. Just like any good classic programmer, the radio tower introduced in the first act is spectacularly climbed by the third, and Roger’s confrontation with the killer is tense and effective. But the conceit of comedic sidekick Billy joining in on one of the many botched radio programs that night and saving the station from ruin is dry and flat. There’s no charm, humor or knowing nod to the genre, just a lifeless couple of scenes only barely rescued by the real action occurring elsewhere as the killer is unmasked.

Movies made during the studio system were filmed entirely on sets, even the outdoor scenes, and the result was an isolated aesthetic, as though these movies were tiny little islands aware of, yet untouched by, the real world. Radioland Murders has that same aesthetic, its skyscraper, like so many pre-Codes before it, holding an entire miniature society meant to represent reality while remaining a cool distance from it. As a member of the audience, you’re meant to respect that distance. Like classic Hollywood programmers, Radioland Murders is not a film to be analyzed, picked apart, measured, weighed and sorted. It’s a film meant to be consumed and enjoyed. You sit down, you laugh at the pratfalls and double entendres and, yes, even the penguin costume, and you leave thoroughly entertained.