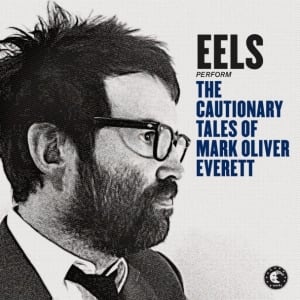 [xrr rating=2.75/5]Don’t look now, but Eels’ Mr. E is beautifully blue again. On the heels of 2013’s Wonderful, Glorious, which was infused with harder rock elements, gruffer vocals and a far more uplifting tone than is common for Eels, The Cautionary Tales of Mark Oliver Everett finds the band’s mastermind reaching inward once more and raising the quivering mess he finds there up into the light.

These new songs lament neglected past loves, character flaws only realized through hindsight, lost opportunities and loneliness. Their themes are familiar ground for the often heartsick Everett (1998’s Electro-Shock Blues was written in the wake of E losing both his mother to breast cancer and his schizophrenic sister to suicide), and though sparse, the instrumentation is right in Eels wheelhouse too. Nothing groundbreaking here for the band, or even for early 2014, which has already seen similarly stripped-down, emotive records from Beck and Sun Kil Moon.

Cautionary Tales’ more glistening moments occur very early and very late. Second track “Parallels”uses softly plucked acoustic guitar as Everett speaks in cloaked language about alternate planes of existence. Though many will misinterpret the song to be about pining over a lost love, E is most likely directly addressing his deceased physicist father, who invented the “Many Worlds” theory (and E even starred in BBC documentary Parallel Worlds/Parallel Lives about his father). Here he sings of never giving up until he finds who he’s looking for because “I know you’re out there somewhere/ And I know that you are well/ Looking for an answer/ But only time can tell.”

Meanwhile, “Mistakes of My Youth” is as retrospective and self-evaluating as its title suggests, and Everett phrases his ruminations of past mistakes from the vantage point of a man who accepts that over half his life has passed. Tender strings seep into the jangly guitar ditty and the whole thing is wistfully hopeful and sincere as Everett sings of his resolve to put an end to self-defeating illusions.

A more middle of the road track, “Agatha Chang” sees Everett drop his voice lower as he recounts a girl he dated in his youth and whom he regrets leaving over stupid youthful impulses. His approach is nearly as stream-of-consciousness as Mark Kozelek, and again the string arrangements add some emotion to plodding guitar plucking. On the album’s most up-tempo track, “Where I’m From,” E again regrets doing dumb things in his youth, but admits he still misses his place of origin. There’s some quavering reverbed guitar underneath higher-pitched arpeggios on “Swallow in the Sun,” but the song never really goes anywhere. And “Series of Misunderstandings” uses music box instrumentation and slightly manipulated vocals by E to force the preciousness down our throats.

An outright lowlight, “Where I’m Going” is borderline obnoxious in its platitudes about not predicting what may come tomorrow, and blah blah blah. “Lockdown Hurricane” is sappy and slow as molasses (to borrow the type of cliché Everett too often leans on) and “Gentleman’s Choice” sees Everett drop his voice into nearly Tom Waits gruffness, but the songwriting is overly mopey and it’s clear the gentleman has chosen banalities about feeling like an outsider.

How you perceive Cautionary Tales is similar to a glass half empty/half full scenario. If you find comfort in familiar sentiments presented with a typical Eels sound, this record will wrap its arms around you. If, however, you were hoping for Eels to slither out into more uncharted waters, than the new album has its moments but too often sounds trite.