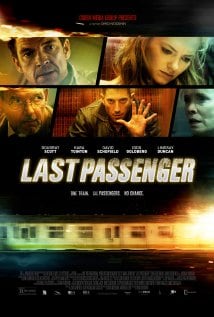 A good thriller can be judged on one thing more than anything else: the tautness of its plot. Thrillers have no room for extraneous characters or twists upon twists; too much of that and you end up with Color of Night. By that standard, Last Passenger is practically a Platonic ideal. It takes place in a single, tightly constrained location with a minimal cast and a single problem to solve: how to stop a speeding train. That’s not a metaphor, by the way.

The hook of Last Passenger is simple and effective. A disparate group of people find themselves trapped on a British train late one night, which is slowly increasing in speed and disregarding all stops. The train conductor (or guard, to use the parlance of the UK) is missing; the emergency stop cords are useless; the driver’s engine room is sealed off and incommunicative. All that’s left is to try to find some way to either slow the train as it gets to its eventual, fatal terminus or to find some way off it. There’s a bottle room effect to the plot, where small grievances betweens strangers swiftly become fights and petty behavior suddenly becomes desperate. But to director Omid Nooshin’s credit, Last Passenger avoids a Lord of the Flies scenario and instead becomes a story about the unexpected bonds between random people who happen to find themselves on the wrong train.

The protagonist is ostensibly Lewis (Dougray Scott), a doctor travelling with his young son Max (Joshua Kaynama) before he’s called into an emergency at a local hospital. He strikes up a flirtation with a passenger named Sarah (Kara Tointon) and for the first 15 minutes or so, Last Passenger genuinely feels like it could be a romantic comedy. Scott and Tointon have genuinely warm chemistry and the slow, languorous feeling of train travel (particularly when offset by the gauzy lights reflected outside the car) could fool you into thinking you’re watching a very different kind of movie. Then there’s a jarring cut between Lewis falling asleep and awaking on a nearly empty train, and things quickly get grim.

Last Passenger ratchets up the tension quickly, particularly as the few supporting characters include a stuffy businessman (David Schofield) and a drunken yob (Iddo Goldberg) who had an altercation before the train went out of control. While both are played somewhat as stereotypes (Schofield in particular plays the officious, stiff-upper-lip type almost to the point of ridiculousness), as the story goes by, they gain depth. In fact, part of the charm of Last Passenger is seeing how the characters that are as blank and easy to peg as people on a train tend to be slowly emerge as actual people. In contrast, the antagonist who takes control of the train is kept invisible for the vast majority of the film, embodied only by a silent intercom system; their motivations are simultaneously enigmatic and prosaic, but ultimately don’t matter. The only thing to do is slow down the train and in keeping to that simple, pure premise, Last Passenger succeeds.