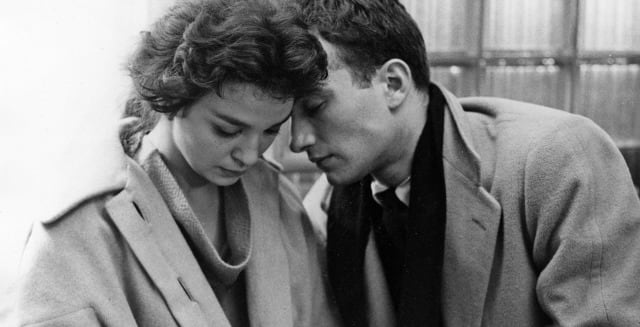 Director John Cassavetes changed the way independent movies were made, so his first film, Shadows, carries a special significance. Cassavetes was a fairly major actor in other people’s films, but more significantly, history has upheld his reputation as a legendary independent director who bucked the system to follow his muse, inspiring and influencing generations of American filmmakers. He was a B-movie actor and a TV detective during the years when he struggled to make Shadows, and it’s hard to tell whether he was just paying the bills or actively trying to become a star. Whatever Hollywood roots he had come from, and whatever big stars and studios he would go on to work with, Cassavetes first film is unmistakably, prototypically, independent.

That doesn’t make it great, but it does make it, in a way, legendary. Plenty of legendary films are unwatchable milestones – (Birth of a Nation always comes to mind. Shadows, about race relations and the jazzy Beat lifestyle of late 1950s New York City, is perplexingly watchable. It’s sloppy in a lot of ways, and in a lot of the same ways Cassavetes would make sloppy films throughout his career. But it has a beautiful, musical rhythm that suggests Cassavetes the B-actor was really an art director trying to get out. 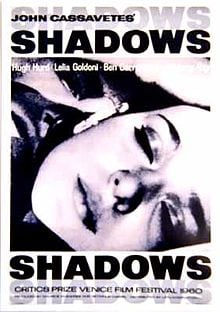 The rhythm comes from the jazz score by Charles Mingus that fuels the movie and from the loose talk and improvisation that comprises the majority of the scenes. Lelia (Lelia Goldoni) is a pretty young girl who lives with her brothers Ben (Ben Carruthers, an uncanny Lou Reed precursor) and Hugh (Hugh Hurd). The three siblings eke out a bohemian existence, constructed from the atmosphere of smoky clubs, boozy cafes and hip parties. We eventually learn that Ben and Lelia are light-skinned blacks, while Hugh, who turns out to be their blood brother, is unmistakably dark. Lelia falls in love with a well-dressed young Beat named Tony (Anthony Ray) who assumes she’s white until she introduces Hugh to him as her brother. Tony’s dismay betrays his hidden conservative worldview, but it’s a minor disturbance – and not an unwelcome one – in the staccato pulse of the story.

Lelia drifts around a stark, aggressively claustrophobic New York of flashing neon and congested streets, while Ben hangs out in bars with his buddies (it’s always funny in a time-capsule sort of way to see that young punks in the 50s dressed in suits and ties) and Hugh tries to make it as a jazz singer at unwelcoming clubs. The movie is all about a dingy, low-rent New York that Cassavetes loved, shot in the fast-paced black-and-white of an indie filmmaker who had secured a budget, a portable camera, a few lights to throw up but not much patience for sticking to a script. It’s lovely, formless during the long stretches where Cassavetes isn’t experimenting with his editing, and the consistently amateur performances keep it always on the verge of being touching.

Shadows is unmistakably analogous to another, even more influential film from the same era. Released within a year of each other, both about disaffected youth sleeping around and daring each other to commit crimes in a grainy, black-and-white, over lit city bopping with jazz, the two films could be brothers who went their separate ways to college, one to major halfheartedly in neorealism and the other to throw himself fully into cinema studies. Shadows is Cassavetes’ A Bout de Souffle, the edgy, urban, jazzy debut of a director who would come to personify a great change in his country’s film culture. In a strangely fair turn of events, Jean-Luc Godard’s debut film’s reputation precedes it – it’s not only one of the most recognized films in history, it remains one of the most alive – while Shadows has remained largely an unseen curiosity. The careers that the two kindred spirits would follow hardly matched up in the coming decades, but a deeper comparison between them is inevitable, given that both made their first movie on what now seems like the same sugar high of filmmaking fever.