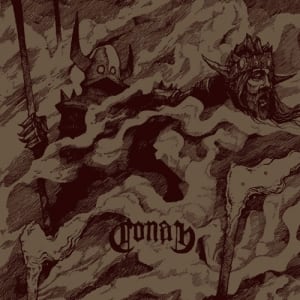 [xrr rating=3.5/5]Recent years have seen doom and sludge metal dominated by the Deep South. Georgia, in particular, has been a haven with thrashing titans like Baroness, Mastodon and Kylesa all releasing albums over the last few years. Torche’s pop infused head banging anthems and the Sabbath-influenced dirges from Arkansas’ Pallbearer must be mentioned as well. So with these waves of filthy grit from the U.S. it’s refreshing for a few U.K. bands to come swigging out of the gate in 2014. Welsh rockers HARK released the excellent Crystalline a while back and now we have Conan’s Blood Eagle. These Liverpool based cavemen have had a steady stream of hype building up since 2012’s Monnos even landing them a split with Bongripper last year. If Blood Eagle is any indication, Conan is bound to rise to the level occupied by the modern American sludge rulers.

With bands like Baroness and Mastodon, sludge metal hasn’t been controlled by simplicity. Mastodon weaves insane backstories for their albums (have you ever tried to figure out what the hell is going on during Crack the Skye?) and Baroness has a penchant for making near ballads (the excellent “EULA”). Conan ain’t about that shit.

The lead single is titled “Foehammer” for god’s sake. Subtlety isn’t a strong suite for Conan, but they embrace the opposite end of the spectrum so well it doesn’t matter. “Crown of Talons” opens the album with a riff only composed of a few simple notes, but those notes are so drenched in dirt and power that it obliterates the thinking process. It lumbers on like a pissed off and intensely focused giant. It sounds like they took a trick from Queens of the Stone Age by tuning the instruments down to abyssal levels. The lyrical content is inspired by sci-fi, but the combined vocal might of Jon Davis and Phil Coumbe make every shout sound the beginning of a Neanderthal war chant. It’s surprising that either one still has a voice. They avoid the high screams or low growlings of other metal bands and instead shout to the heavens like the Dragonborn. Add Paul O’Neil’s thunderous drums and you’ve got a sound infused with blood lust. O’Neil’s approach is deceptively simple; I was walking near a construction site while listening to “Crown of Talons” and realized the clanking sound of the machinery in the background would have suited the songs just as well as a drum kit. O’ Neil knows this and squeezes the life out of the skins, making it sound not of a man.

Blood Eagle moves in two gears: slow burn and crushing trot. Even the fastest song here, “Foehammer,” feels sluggish when in comparison to peer made records, but it’s not a problem. That speed allows these songs move along like a steamroller, any faster and they would lose some of their power. The chugging brutality of “Gravity Chasm” (which is my song title of the year) is monolithic in size and the bookmarks of this album, “Crown of Talons” and “Altar of Grief,” both clock in at over nine minutes. Only six songs here, but each one feels like a monster. That’s probably the best way to describe Blood Eagle. It’s monstrous in size, shape and scope and it’s a vicious beatdown of an album. As a metalhead friend of mine would say; “It’s heavier than lead whales.”