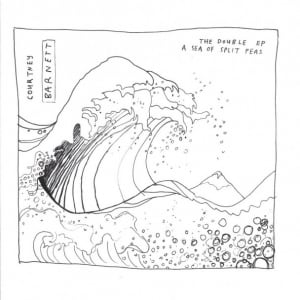 [xrr rating=3.0/5]Between the rushing from venue to venue and the blur of same-y indie/punk/rock bands that took the various stages at the CMJ Music Marathon last year, Courtney Barnett is one of the few standouts. In a week that seemed to confirm some of my worst fears about the homogenous state of independent music in the 2010s, Barnett was a songwriter who had a clear, distinctive voice. Halfway between psychedelic troubadour and post-modern slacker, Barnett’s songs were surprisingly understated trips that are often as deceptively hallucinatory as they are achingly honest. A songwriter with raw talents like hers should be set to debut with something that emphatically announces her to the world, but The Double EP: A Sea of Split Peas is not the album to do that. Hell, it’s arguably not an album at all: as the title indicates, it’s a combination of Barnett’s two EPs on a single disc, probably to court in an American audience that has only just now started to find out about her. In that sense, it’s a decent introduction to Barnett, but there are moments when one wouldn’t be blamed for wanting to wait longer for a proper debut.

At her best, Barnett is a crack lyricist whose speak-sing cadence recalls the best moments of Lou Reed’s twisted tales with a hint of Stephen Malkmus’s slacker nature, and the first half of A Sea of Split Peas has plenty of these moments. First single “Avant Gardener”—far and away Split Peas’ best song—stutters along with bursts of feedback while Barnett begins her day asking “What wonderful things will happen today?” with all the excitement you’d expect from someone too lazy to clean her front lawn. When the shit starts to hit the fan, Barnett’s bemused detachment becomes infectious as each surreal turn of phrase is met with a wry smirk. “History Eraser” goes along more conventional lines, but highlights her charm and her way with a pithy line. What’s more, for a writer as well-versed and literate as Barnett is, she’s equally adept at making her words work within traditional song structures. Her songs are structurally sound and inventive, and there’s not an instance of trying to wedge vocabulary words into songs just to show them off. (Looking at you, Colin Meloy.) It’s that modesty, that refusal to overindulge artistically, that allows Barnett’s gifts to really shine.

That modesty comes at a price, though. While Barnett is a gifted, witty lyricist, she maintains a level of musical conservativism that keeps A Sea of Split Peas from really making an impact. At points, this is disguised by pairing Barnett with a strong backing band that plays with enthusiasm, even if they’re not the most revolutionary musicians in the world. As the album progresses—and, indeed, as the songs get slower and longer—the cracks start to show. Barnett’s limited musical lexicon causes her songs to blend together over time, and longer tracks like the reverb-heavy “Porcelain” tend to be more tedious than anything else. Occasionally, Barnett can save a song with a good lyric, but that doesn’t happen all the time, and a number of Split Peas’ songs—particularly those later in the album—end up being duds. It’s a sudden drop in quality, and it’s a shame given how strong the preceding songs are.

Perhaps it’s inevitable that a collection like this would end up so inconsistent, but there’s still plenty on A Sea of Split Peas to recommend. Part of me wishes that Barnett had waited to compile a stronger set of songs for a proper debut, but I suppose that time and a fickle audience of American indie rock fans may have forced her hand here. Still, there’s a lingering feeling that Barnett is capable of producing a great album, but only gave us a decent one to start with.