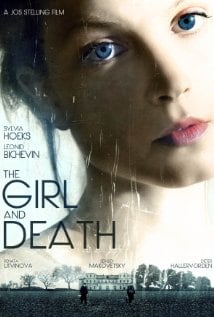 [xrr rating=3.0/5]The warm melancholy of a Chopin piano sonata sets the tone for Jos Stelling’s The Girl and Death. Languid and tragic, the film is an unabashedly melodramatic tale told in the Romantic style, a story of passions sent away only to return again, driven by fate and desire. Concerning impetuous medical student Nicolai (Leonid Bichevin) and his devastating love for the beautiful but kept Elise (Sylvia Hoeks), the story is told in flashback, as the now-elderly Nikolai travels through Nazi Germany back to the small town of Tennenfeld where his love began.

Nikolai finds the now-abandoned hotel where he met Elise, tucked away in the overgrowth just outside that village, and thinks back to decades past. He remembers seeing her for the first time in the hotel’s dining room, and pursuing her despite the warnings of the Russian whore Nina (Renata Litvinova) and the presence of brutal old Count (Dieter Hallervorden) who keeps the young Elise stashed away for his personal pleasure. Nikolai could only temporarily persuade Elise to leave behind her life with the Count, whose money allowed her both comfort and good health. Longing begets sacrifice and regret; the lovers part and reunite repeatedly over the course of several years.

Contemporary cinematic treatment of 19th century literature tends toward camp, often unintentionally, as tropes audiences found so moving nearly two centuries ago have become high-tone melodrama in our time. The Girl and Death, however, mostly sidesteps that pitfall, achieving a wholly different texture from current-day adaptations of, say, Austen or Lord Byron or Pushkin, in part because it favors a strict Romantic and Gothic tone over contemporary influences. Elise, for example, is right out of Edgar Allan Poe, as pale and blonde and tubercular and doomed as Lenore ever was, while the title is a play on Schubert’s String Quartet No. 14 (“Death and the Maiden”), and dialogue and scenarios are lifted wholesale from various versions of Camille.

Visually, however, The Girl and Death takes its cues from a wider variety of sources, most notably in a handful of sharp edits and reveals, as well as framing and tracking shots that could have been ripped straight out of a modern-day horror film. There are scenes which are direct descendants of campier horror flicks, too, movies such as Gothic (1986) and Fellini’s Casanova (1976) and a good half dozen Hammer horror films of the decade before. But The Girl and Death omits the humor, the screams and — mostly — the bustiers; its menace is fleeting, its blood merely a few spilled glasses of claret.

Unfortunately, this all begets little more than an interesting premise, one whose execution lacks the control and precision it needs to be fully realized. The Girl and Death means to be meditative, but a smooth tone is impossible to sustain amidst so many continuity errors, cliches and a plot that crumbles under even the most delicate scrutiny. Unable to provide anything but unsatisfying melodrama, The Girl and Death creaks and groans under the necessities of its chosen genre. Beautiful on the surface but hollow underneath, it’s the modern-day hybrid of Elvira Madigan and Camille we never asked for.