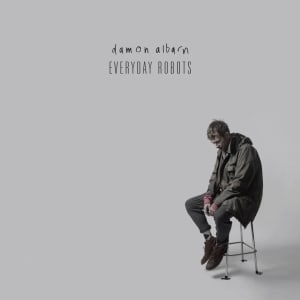 [xrr rating=3.5/5]Damon Albarn has apparently run out of the sunshine he had in that bag. Despite some ukulele and steel drum from an artist responsible for the impeccable Plastic Beach, there’s nothing sunny or breezy about Everyday Robots. Similar to how Jack White’s first solo outing appeared after a deep and diverse collaborative output had already been established, Albarn’s first proper studio record coming all these years into his career automatically becomes an event, and rightly so.

How you receive Everyday Robots may depend largely with how much of his vast discography is within your ken. Gorillaz-centric fans won’t be able to cling to the bounce, rhythm or otherworldly overtones that can really only come out of a band that’s presented as a cartoon. Good luck finding any of the guitar distortion-laden Britpop of Blur. You may hear some of the Good, the Bad & the Queen here, but with far fewer artistic flourishes. So what’s most striking about listening to Everyday Robots is that, while nothing on this record can be pigeonholed into one segmented version of Albarn, the record feels like it’s culled from the entirety of the man’s creative vision.

For as cohesively Albarn as the album is, the theme of technological malaise isn’t exactly breaking new ground for the artist. Plastic Beach was infused with melancholia for the prefabricated nature inherent to much of modern life, and Everyday Robots’ opening title track relating that “We are everyday robots on our phones/ In the process of getting home/ Looking like standing stones” could simply be construed as a man of certain age railing against kids these days. “Hostiles” and “Lonely Press Play” double down on the technology being the cause of and kneejerk solution for our gloominess. But while this subject matter isn’t revelatory, the songs sound incredible. “Everyday Robots” loops a pensive violin over shambling electronics and Albarn’s moody piano, “Hostiles” possesses a lurching synth loop and tenderly plucked acoustic guitar and “Lonely Press Play” presents a more sedate clapping beat to those found on early Burial releases or Thom Yorke’s The Eraser.

The clouds part briefly on “Mr. Tembo.” Over upbeat ukulele strums, maraca shakes and electronic chimes, Albarn spins a yarn full of African imagery. He’s joined by a robust choir and the track is a beacon of light amidst all the pretty downers. From there it’s back to calmly bristling against the machines. On “Selfish Giant,” Albarn laments that “It’s hard to be a lover when the TV’s on/ And nothing’s in your eyes.” In “You & Me” the melancholia is pierced but an steel drum interlude that comes out of the blue and drives home that Albarn is willing to utilize every tool in his bag of tricks. He uses vocal samples on occasion as well, from distant chatter of children at play on “Hollow Ponds” to an opening clip by 1940s comic performer Lord Buckley on “Everyday Robots” to spaced-out wisdom from LSD prophet Timothy Leary on “Photographs (You Are Taking Now).”

All in all, Everyday Robots takes familiar Albarn motifs and repackages them beautifully. This isn’t a game-changing record or even an especially self-revealing record for the prolific Brit. It is, however, a well-executed and successful first solo album, one that’s mellifluous in its melancholy.