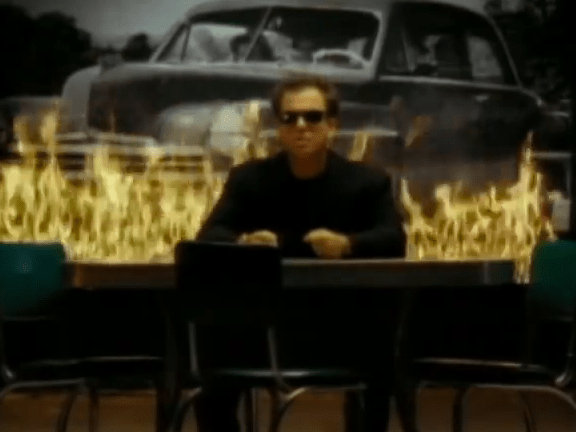 Whenever people are asked what the first record they bought was, the answer invariably goes something like this: “I was three years old and heard ‘Like a Rolling Stone’ on the radio. I immediately asked my parents to buy me everything by this guy called Bob Dylan. That eventually led me to Throbbing Gristle and I haven’t stopped since…” A certain famous website even has a feature where musicians describe what they were listening to at various ages; the general tenor of that feature is that said musician discovered Mission of Burma or some other critical favorite when he was something like five years old and that he moved on to Prokofiev by the time he was 10.

This is BS. Most of us cut our musical teeth on the garbage we heard on the radio; if you were a pre-teen around 1989, chances are you also wasted your allowance on cassette singles. So, behold, the junk I thought was good way back then, uncovered during a recent move, and more embarrassing than any stash of VHS smut tapes.

“I Remember You” – Skid Row

So, yeah, my 11-year old self was really into Skid Row in ’89. “I Remember You” is the obligatory power ballad at its worst: cheesy, emotionally syrupy yet trying to cling to some shred of masculinity. “Love letter’s innocence?” Grow a pair, dude.

I can still remember the classmate who whispered in conspiratorial tones how this song was so cool because it was about drugs. Last I heard that guy never made it through high school and was living with his parents in Dyer, Indiana. He’s a Dyer-rean. What’s the moral of this story? Give up the Crüe before you hit puberty.

Christ, another power ballad. I apparently was a fan of cheap melodrama back in 1989. As ruminations on mortality go, this one’s not exactly on par with I See a Darkness.

“The End of the Innocence” – Don Henley

OK, I’m standing by this one. “The End of the Innocence” is a great song, even if it’s by an Eagle. Maybe it’s overly sentimental and its characters are little more than AOR stereotypes, but for whatever reason I’ll defend the relative merits of this Don Henley hit.

“The Living Years” – Mike and the Mechanics

My Catholic upbringing rears its pious head. Catholic moms loved this one and wasted no chance to foist it upon their children. When that choir kicked in and those soppy lines about regret and dead relatives were spewed out, the waterworks really started to flow.

I can still remember trying to pick apart the lyrics and learn about the events and people mentioned. My budding interest in history found a voice via this Billy Joel pseudo-rap, even if I was too caught up in the places and names to realize that the song’s whole “point” is complete nonsense. Badass table flip though, Billy.

There is no explanation for this one being in this miserable cassette collection other than I must have thought Paula Abdul was hot. I’d make a joke here about this song possibly being about a deceptive “pharmacist,” but that’s too easy.

“Another Day in Paradise” – Phil Collins

No one sings about homelessness and the disparities between the haves and have-nots quite as convincingly as Phil Collins. At least when you’re a kid and don’t know any better.

Guns N’ Roses were evil incarnate, the official purveyors of sin and excess, to the concerned parents and priests of Saint Ferdinand Catholic Grade School, which made them all the more appealing to young ears. I still remember telling my parents that “Patience” was by a group called GNR and not Guns N’ Roses. I’m sure they didn’t buy that.

“Janie’s Got a Gun” – Aerosmith

This song had it all: domestic violence, patricide, an emotional video in constant rotation on MTV and a once-mighty rock band going pop and wheezing out (again) as the 1980s closed. Heady stuff for any young kid who couldn’t recognize how clichéd the song really is and who was also unaware that Aerosmith peaked with Toys in the Attic.