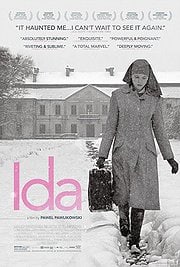 [xrr rating=3.5/5]There’s a running sub-genre of the European art house, one as popular today as ever, most easily tagged as the post-war trauma movie. Taking stock of the emotional damage which lingers years beyond the end of violence, these films act as a condensed reckoning, assessing what came before and after, telling personal stories that reflect larger political concerns. These movies deal with the fallout from World War II, a massive catastrophe that utterly transformed the landscape of the continent, reconfiguring national and international issues while deepening existing tensions. When done well, in classics like Hiroshima Mon Amour or The Conformist, the war is a secondary focus as well as an impelling force, the specter of past horrors pushing people toward an uncertain future.

This is the case in Ida, a nearly-great drama whose investigation of Nazi atrocities reverberates visibly under icy high-contrast cinematography. For Anna, a novice about to enter sisterhood in 1962 Poland, the war has been an extraordinarily disruptive force, even if she’s not fully aware of its impact. Commanded to leave the convent and see a bit of the world before taking her vows, she ends up on an extended visit to her aunt Wanda, who informs Anna of a few key items about her past. First and foremost is the fact that she’s a Jew, born Ida Lebenstein, the last remaining member of a family murdered and buried somewhere in the woods, killed by the very farmer who’d been shielding them from the Nazis.

This revelation sets a course for the aunt and niece to head off to the countryside to find the remains of Ida’s parents and older brother. Keeping her hair covered at all times, the soon-to-be nun struggles to retain her cloistered religious identity, even as the allure of earthly pleasures beckons. Many of these are channeled through her aunt, an independent single woman not afraid to indulge in drinking and casual sex. Wanda also works as a prosecutor for the nation’s oppressive pro-Soviet government, and the shaky attachment that forms between these two mirrored characters demonstrates different reactions to different permutations of grief, Ida’s sudden revelation positioned against Wanda’s gradual slow-burn remorse.

Befuddled and adrift, they match the rhythms of a changing Poland. The quiet stillness of the convent is a self-imposed prison, and a refuge from a confusing world defined by Cold War politics and a steady infusion of jazz and rock music from the West. Anchored by Lukasz Zal’s crisp cinematography, Ida is a study in distances, the gulf between bodies and objects conveying its most telling details.

It’s an appropriate choice for the story of women with so much in common and so much distance between them. Wracked with guilt over her dead sister, unable to offer her niece much beyond slender family bonds and the poisonous gift of grief, Wanda aligns herself with a trinity of parental influences pushed by their own weakness into various forms of betrayal. A church which did little to protect the weak, the farmers who tried to help but collapsed under the pressure, the aunt who combats shame with self destructive behavior and collaboration. Depicting all three with grace, understanding and elegance, the film is reticent but rewarding, a nicely-crafted portrait of people struggling under the withering influence of totalitarian systems.