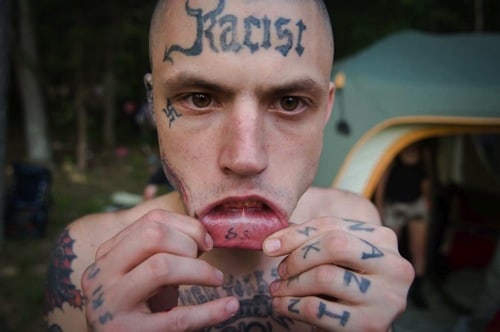 [xrr rating=4.0/5]Anthony S. Karen’s vivid, blunt photographs pass no judgment on their subjects. In an interview at the end of his newest ebook, White Pride, Karen says he doesn’t “think [his] images dispel or reinforce anything in particular,” a remarkable statement to read after leafing through the photos in this ebook. He aims for a moderate, balanced take on the radical subjects he covers: Ku Klux Klan ceremonies and members, and portrayals of White Power skinhead gatherings. While his rhetoric idealistically aims for objective reality over subjective meaning, his pictures provide a strong counterpoint.

White Pride is segmented into chapters on the KKK and White Nationalists, and the first of these is the strongest. Karen made his name with photos of previously unseen KKK ceremonies, as well as intimate access to the daily lives and routines of its members. He favors short, close-up compositions of people, sometimes posing for profiles, sometimes caught in a highly photographable act. Karen takes us to Christmas parties, retreats, inductions and church, as well as a special KKK wedding ceremony.

You could argue that Karen’s flair for mundanity is his greatest asset, and allows for the deconstruction of otherwise powerful images. He takes the reader through the step-by-step preparation of a burning cross, building torches, binding the cross in cloth, covering it in gasoline and carrying it to the ceremony in the woods. By the time Karen photographs the actual burning, what should be a fearsome image has been, in a sense, defanged, though he hardly imbues the moment with the KKK’s preferred tone, either. This is possibly the closest he gets to the notion of images without inherent meaning, and he strips the burning cross, a symbol as loaded as any in American history, of much of its heritage.

Because he has less access to these everyday actions, his White Nationalists chapter is less successful, though still plenty accomplished. His most intimate pictures are taken at events like unity retreats, and he tends toward marches and hardcore concerts. If Karen means to humanize his subjects, he does not necessarily succeed: the skinheads and Neo-Nazis are tatted out and, as with one self-appointed “border defender,” menacingly armed. It’s interesting that the white supremacists who have a much less violent legacy than the KKK come off as the scarier group. This might not necessarily be by Karen’s design, but it comes across this way on the page.

Despite his neutrality rhetoric, there are a number of indelible images whose inclusion seems designed by Karen to provoke a response. A young child with a “Niggers Beware!” shirt, a noose hanging outside an Imperial Wizard’s house, a man shooting a cockroach with a pellet gun as his wife and goddaughter cover their eyes in a trash strewn house; these and other pictures will undoubtedly leave an impact on any reader. When I first saw Karen’s photos in a Slate piece talking up White Pride, I was struck by the commonness of the poverty, bearing hallmarks that felt familiar to me from growing up in a rural area. In many cases these seem like people who feel an intense pride for their race and (imagined) heritage because they have so little else to grab onto. Where once the KKK and Nazism had the support of the wealthy and influential in America, with minor exceptions, only those at the bottom of the ladder really take part anymore in these kinds of extreme displa¬ys of heritage.

Perhaps I am reading my own personal beliefs into it. If that’s so, then this seems to be what Karen was going for with White Pride when he asks “Think of this: as a viewer, what would you rather have, a story documented on the left, on the right or in the middle where you can form your own opinion?” Regardless of where one believes he stands, he presents us with a powerful document here; it’s up to us to decide what we’ll do with it.

White Pride is available at the iTunes store.