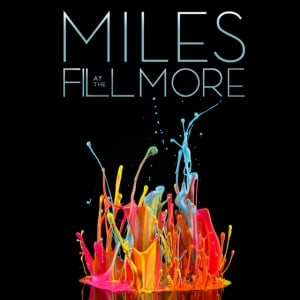 [xrr rating=4.5/5]Miles Davis’s “Electric Period” from 1969 to 1975 represents a time of ceaseless and insistent progression, in which neither his core sound nor his lineup ever stayed stable for long. Perhaps losing his Lost Quintet was a fitting precursor to what was just around the bend. Personnel would come and go, sometimes session to session, and Miles’s old penchant for spotlighting the members of his groups would give way to a more collective entity. Supporting players still had a chance to shine and go on to superstardom (Tony Williams, Keith Jarrett, John McLaughlin and Wayne Shorter being are just some of the jazz icons who broke out under his wing), but operated in the moment as a hive-mind instead of an outfit of collaborative individuals. Indeed, Columbia’s previous entry in their Bootleg Series for Davis, the first official release of Lost Quintet recordings, speaks to how transitional that band was, its set lists consolidating that which came before in order to step fearlessly into the unknown.

Not that Davis ever rested on his laurels—he pioneered more permutations of jazz by 1968 than most musicians could ever credibly even play along with—but by the time of the four-night residency at the Fillmore East captured on this disc, he was a force of nonstop evolution. A glance at the track list for the four discs of Miles at the Fillmore gives an initial impression of tedium, with the set list of each night almost identical to the others. Listening to each night’s performance, however, reveals small discrepancies that snowball into vastly different experiences. As bassist Dave Holland described the band dynamic under Davis, “You don’t try to change the course of the river. You just try and go with the flow of it and use that flow in a way that will carry the music along.”

Take the contrast of “Directions,” a Joe Zawinul composition written during his time with Davis that remained in Davis’s set list through 1971, between the June 16 and 17 shows. On the first night, “Directions” introduces the set with a funky nature that anticipates the more driven, bouncing playing of the following year’s A Tribute to Jack Johnson. Keith Jarrett’s organ takes on an effect like a guitar flange that rolls over Chick Corea’s more pointed electric piano stabs, while Davis plays with propulsive power and a rich, well-defined tone that became scarce in subsequent years. The following night’s rendition, however, belongs more to the style of the Bitches Brew material that dominates the sets. It’s looser and more fluid, with Corea’s electric piano taking the fore over Jarrett’s more distorted and boisterous organ, yet it also moves at a faster clip. If the band simply went with the flow of “the river,” these differences in the set openers dictated the directions of the full performances, with the June 17 show so cohesive and on-fire that the band even managed a rare encore, despite being restricted by their position as the opener for singer/songwriter Laura Nyro.

Consistent across all four nights, though, is the unimpeachable talent and responsiveness of the band. Compared to the more solid and steady bottom end that Michael Henderson would provide for Davis for the rest of the decade, Holland is a more active participant in the overall sound, though well aware that his primary job is to anchor the other members’ explorations. But when the other half of the rhythm section is Jack DeJohnette, even outright showboating looks tame. DeJohnette plays with as much fire as soprano saxophonist Steve Grossman, laying down his own sheets of sound when the band cuts loose showcase “Bitches Brew” and switching rhythms on a dime to lead the group through the composition’s numerous intervallic leaps through time signatures. Even on the more reserved numbers like “The Mask” and “It’s About That Time,” DeJohnette’s rolling snare patterns and intricate cymbal work maintain the sense of tension that underlines each set. Davis’s electric work of the ‘70s is volcanic, and with the closest thing to a guitar here being the surprisingly heavy give-and-take between keyboardists, DeJohnette’s pile driving, polyrhythmic drums give the clearest hint toward how Davis’s music would sound over the next few years.

Contrary to the usual M.O. of this series, the material in this box set has been officially released before, albeit as four heavily edited vinyl sides, one for each night. The original Miles Davis at Fillmore situated the live album among Teo Macero’s contributions to Davis’s studio recordings, a product of post-production as much as fearless exploration by the musicians. Macero’s role in this period of Davis’s work is invaluable, a revolution behind the boards paralleled to similar displays of production-as-composition in contemporary Jamaican dub and German Krautrock. But these unedited live performances from the Fillmore East (as well as a handful of tracks from a Fillmore West date back in April of 1970) demonstrate how well Davis and his collaborators knew how to change and refocus in the moment. The artwork for the box set, of sloshing, primary-color paints flung together, is an on-the-nose symbol of fusion. But it also perfectly encapsulates the fundamental, formless nature of this music, which stakes a better claim to fusion as a concept of musical synthesis and evolution than the empty technical showcases and easy-listening that gave the genre a deservedly bad reputation. Davis would go further, much further, before the decade was out, but that only gives the false impression that the playing contained in this release could even be remotely replicated today.