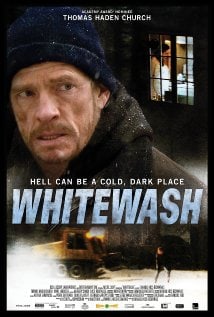 [xrr rating=4.0/5]A snow plow bears down on a man stumbling down a dark rural road. He’s struggling, disoriented, probably lost, and doesn’t seem to hear the plow’s low rumble behind him, the sound nearly drowned out by a winter storm. Whether Bruce (Thomas Haden Church) even sees the man until the second before impact is unclear; the storm blocks his view, and the jangle of empty beer bottles in the cab is a distraction. What is clear is that Bruce has a cool, efficient method of dealing with an inconvenient corpse. He tosses the body into the scoop — but not before taking the man’s gloves for himself — and drives him down the road, only to dump him unceremoniously into a large snow drift.

With deft understatement and wry humor, Bruce narrates his side of the darkly-humorous tale at the center of Whitewash, writer-director Emanuel Hoss-Desmarais’ first feature-length film. Hoss-Desmarais has a terrific feel for the homogeny of both the culture and the landscape of a rural Quebec in the midst of a long, cold winter. Geographically isolated, Bruce’s world is one where a medium-gray haze passes for the light of day, and by night, an impenetrable black covers the countryside. Streetlights are blocked by the falling snow, while the cozy yellow warmth from neighborhood homes only a few yards away look as though they might as well be on Mars. It’s so dark, even the strongest light can hardly cast a shadow.

Populating this cold land are cold people, no one caring to connect in even a cursory way, and if they do, it’s only because they want something. There is no sitcom-friendly, small-town camaraderie here, just a bone-weary indifference, which makes it easy for Bruce to decide to hide out in the nearby forest after the accident. Through flashbacks, we learn Bruce knew the man he had just flattened with his plow, a Quebecois named Paul (Marc Labreche), and the bizarre series of events that lead to Bruce living in his plow in the forest, trying to survive by eating bark.

Though Labreche does a fine job, his is mostly a supporting role; Whitewash is Thomas Haden Church’s show. It’s an impressive performance, Church managing a consistent tone even as his character’s behavior fluctuates wildly. Church has an amazing range, managing to run the gamut from panic to cold calculation, from hallucination to stark lucidity, and with such a light touch that his Bruce still easily blends into his bland surroundings like an arctic fox blends into the snow. Despite the harsh conditions and his inevitable emotional decay, Bruce still understands the absurd humor of his situation.

Whitewash is an unflinching look at isolation, both involuntary and self-inflicted, but it’s not an unforgiving look. There will be the inevitable comparisons of Whitewash to the work of the Coen Brothers, especially Fargo (1996), and that’s to be expected, though such shallow comparison would sell the film short. Though Hoss-Desmarais finds humor in the most horrifying of circumstances and refuses to wallow in even a moment of pathos, it’s still a touching film, one imbued with subtlety and grace.