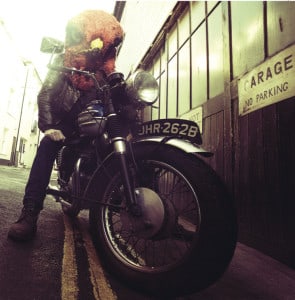 [xrr rating=2.5/5]English retro rock trio Admiral Sir Cloudesley Shovell takes its name from a 17th century Admiral of the Fleet, a mischievous and effective way of setting the tone for their grimy ’70s-indebted hard rock. The band’s 2011 debut remains one of the better records to come out of this decade’s old-school metal revival, and Check retains that first effort’s scattered focus, trying out analog metal, punk tempos and noisy guitar rock while favoring songs that stack quickly shifting rhythms. While the Admiral has enough chops to justify the silly gravity of the band’s image (a giant bird mask shows up on the front of both albums), this sophomore effort relies too heavily on that charisma to justify otherwise forgettable songs. Check ‘em Before You Wreck ‘em nails the sound and style of a nostalgic rock album, but it’s far less exciting than music with this much swagger and bravado should be.

That’s because many of these songs are frustratingly inconsistent, often landing on inspired details that only show up for a moment instead of being the song’s centerpiece. The title track careens along with fatiguing abandon until an enchanting middle section turns the bass groove into a wigged-out psychedelic rocker. The song’s frenetic punk riff would have been better served as a whirlwind intro that quickly gave way to the song’s carefree metal guitar solo, following that middle detour to some weird destination more in line with the band’s knack for less urgent melodies. “Captain Merryweather” plays off that casual, garage-rock flavor much more effectively, a cluster of voices singing in a disheveled and endearing attempt at harmony that feels like a giddy concert sing-along right in front of the stage. It’s a great effect, but not capable of sustaining “Captain Merryweather” as the song stretches into an overlong eight-minute marathon. “Shaker Your Head” actually works from start to finish, but the song’s clattering breakdown—reminiscent of early Clutch—still ends up being its most compelling moment.

Admiral references rockers like Led Zeppelin and Deep Purple better than they do more frenzied metal acts, and Check ’em Before You Wreck ’em fares much better when the songs build from that loose blues-rock template. “2 Tonne Fuckboot” rampages along a series of stuttering guitar figures, Admiral’s Johnny Gorilla growling out a spacious vocal that only emphasizes the melody’s sharp angles and the band’s subtle command of technique. “Shaker Your Head” and “Bulletproof” both strut along with a more traditional guitar-chord groove, the former invoking “Hey Hey What Can I Do” right at the end. All three prioritize a single killer melody and are better for it, registering as fully formed songs sequenced next to tracks that pack in far too many lackluster ideas.