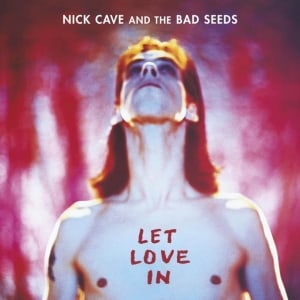 Nick Cave is a strange one. Over the course of his long career with the Birthday Party, the Bad Seeds and Grinderman, he’s been many things. He’s been a punk singer, a balladeer, an enfant terrible, a dirty old man, a blues revivalist, a novelist, a screenwriter, an actor, a pervert, an addict and a romantic. He’s been writing and performing music for himself, his bands and giants like Johnny Cash for over four decades and shows no sign of slowing down. But of all the things Cave has been, perhaps the strangest has been his flirtation with stardom.

A musician like Cave shouldn’t be popular. He’s too weird and grimy and lewd and sentimental to be counted on to break through into pop culture. Yet Cave and the Bad Seeds have done it again and again. 1994’s Let Love In was the band’s first foray into the mainstream, breaking into the Top Ten in their native Australia and doing nearly as well in the United Kingdom. But viewed again 20 years later, it’s almost absurd; there’s almost nothing on Let Love In that could qualify a mainstream hit. The single “Do You Love Me?” didn’t crack the Top 50 at home or the UK, and its most famous track “Red Right Hand,” which has gone on to become one of Cave’s most beloved songs, didn’t even chart. So what made this the album that sparked Cave’s brief ascent into MTV stardom?

Perhaps it was the time. 1994 was a strange and crazy year. The Cold War was winding down, an adaptation of Hamlet featuring talking lions smashed box office records and Nirvana was the biggest band in the world. While the sound of the Bad Seeds is only glancingly similar to Seattle’s finest, the sudden and immense popularity of grunge opened the gates for college rock to go mainstream. Suddenly, bands that wouldn’t have had a moment’s consideration were potential candidates for acceptance. Let Love In is not drastically different from the Bad Seeds records that preceded it; lyrically and musically, it’s of a piece with Henry’s Dream, released two years earlier. If anything, the 1990 release The Good Son was a more sedate departure from the dark, abrasive sound that Cave and the band had developed.

Maybe it was the environment. Cobain broke the barriers that kept weirdoes off the radio, why shouldn’t the Bad Seeds benefit? Well, for one thing, Let Love In is not a good place to start with Nick Cave. It currently sits almost halfway through the Bad Seeds’ catalogue, ready to make stylistic changes, but not quite there. Hindsight shows the album as something of a holding pattern. The bookend songs “Do You Love Me?” and “Do You Love Me? (Part 2)” build off a melancholy sound first developed on The Good Son, while “Loverman” could have been written for the harsh sounds of Tender Prey. While Cave and the band were by no means resting on their laurels, Let Love In did not break new ground for the band.

The production, courtesy of longtime collaborator Tony Cohen, was notably crisper than their earlier records, but nothing like the polish of Butch Vig or Billy Corgan. The following record Murder Ballads (1996) would be their true commercial breakthrough, featuring a duet with pop idol Kylie Minogue and music videos in rotation on MTV. What made this the album that pushed them to the edge of popularity, if only for a little while?

Who knows? Musical trends were never part of the Bad Seeds mentality, given their shifts from raw animal fury to heartfelt balladry. Twenty years on, Let Love In is a fluke of an album, neither Cave’s strongest nor his strangest. But it is one that could be seized upon and turned into a breakthrough, with “Red Right Hand” alone appearing in everything from “The X-Files” to Scream to Australian winery commercials. While the album may have started them on their brief foray into the mainstream, it’s remarkable that it did so while virtually changing nothing of the Bad Seeds’ sound or Cave’s weird songwriting.