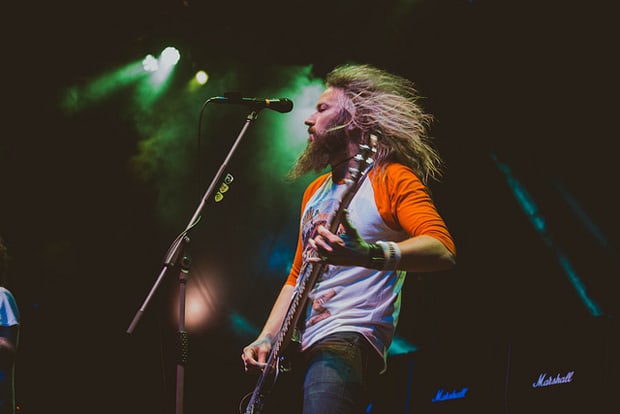 Mastodon recorded some of my favorite metal albums of the ’00s, but when they finished their 17 song set list at Portland’s Roseland Theater, I felt I had betrayed them. Their portion of the show was not bad, but it was the weakest of the night. The Georgia quartet was sluggish and simply outclassed by stunning opening sets from Kvelertak and Gojira.

Kvelertak had a scant 30 minutes to perform, but they played like headliners. Frontman Erlend Hjelvik wore a terrifying owl mask as Kvelertak mixed their punk with metal fury reminiscent of a modern and heavier Steppenwolf. I’ve never been a huge fan of their studio work, but these songs were more energetic live. French metal group Gojira followed. Of the three bands on the bill, I was least familiar with their work, but I ended up loving their sound the most. Flanked by the most imposing wall of amps I’ve ever seen, Deafheaven is perhaps the only other band that even comes close to their sheer power. Gojira is all about the low end. Their second song, “The Heaviest Matter of the Universe,” could have been the tagline for their show. Drummer Mario Duplantier’s legs worked like jackhammers on songs like “L’Enfant Sauvage.” He was never flashy, but if you paid close attention you could see his entire body working to pull off the avalanching fills and cymbal work. Frontman Joe Duplantier was menacing—if he told you to put your hands up, you put your fucking hands up. Gojira closed with “Blow Me Away You(niverse),” stretching it well beyond the seven minute studio version. They played the monolithically heavy and mesmerizing outro riff for several minutes, working the crowd into a frenzy.

An intense energy lingered after Gojira’s set and I expected a moshpit to start up as soon as Mastodon launched into their first song. However, Mastodon wasted it. They opened with Leviathan slow burner “Hearts Alive,” which built so sluggishly that the crowd was bored by the time it finally gained momentum. Mastodon’s energy didn’t come close to matching to what the crowd exuded. The band seemed out of sync with each other. Instrument and vocal problems plagued guitarist Bill Kelliher. He repeatedly signaled to the sound man backstage to turn up his vocals, which were drowned out by the rest of the band. Near the end of the show, he tried to tune his guitar when drummer Brann Dailor started a song. He held up his hand to signal to the rest of the band to stop, but they didn’t. Song choices were questionable. The band passed over Mastodon staples “Blood and Thunder” and “Mother Puncher” for the underwhelming “Blade Catcher” and songs from the mediocre The Hunter.

Did “Siberian Divide” manage to be atmospheric and heavy? Yes. Did Dailor sound like an octopus on his kit during “Crystal Skull”? Yes. Was it awesome to hear the audience scream along to “NO ESCAPE” during “Divinations”? Hell yes. But Mastodon’s lumbering set didn’t catch fire until well into the second half. The best barometer for any metal show is the intensity of its mosh pit, and Gojira easily topped Mastodon in that department. Mastodon ended with The Hunter closer “The Sparrow” and an oddly polite speech from Dailor that announced that they would be back in Portland after the new album was released. With no encore, the lights came up. Do I plan on seeing Mastodon again when they come back through? Probably, but if they play with the same energy they did here, I’ll demand that Gojira gets to play a full headliner’s set.