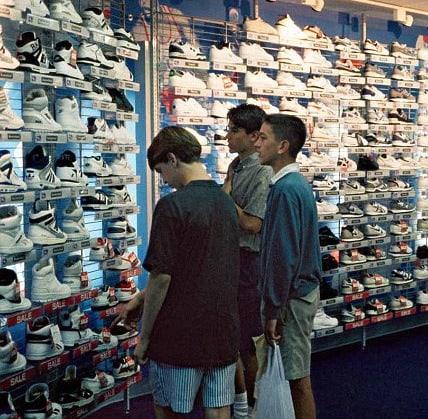 [xrr rating=4.0/5]It’s hard to not approach Michael Galinsky’s Malls Across America as a novelty, especially with the internet buzz that accompanied its release. The project unfolded in 1989, when, as a college sophomore, Galinsky took a cross-country road trip to photograph mallscapes at the urging of his photography professor. To hear him tell it, the experience was practically dismal: “We had no money, nowhere to stay, and no way of meeting people… We were too broke to sleep in motels and too cheap to even go to campgrounds most of the time.” This sense of dislocation is partly why Malls Across America reads with so much complexity to viewers in 2014. At first the fascination is with ‘80s fashion and hairstyles – no doubt the nostalgia factor has plenty to do with its contemporary release – but taking in the collection shot after shot, the artist’s original intent seeps through. Galinsky relates how there was no hope of identifying which film rolls were shot where without labeling them. He wasn’t anywhere but he was everywhere. Malls were places that existed outside of place. Whether that notion is comforting or bleak is debatable. Galinsky’s work suggests both.

Remember too that this is 1989 – we’re out of the happy fluorescents and into the acid wash. It’s a little late in the decade to classify this as a manipulative nostalgia trip, which helps the reader focus in on Galinsky’s conceit. There are hallmarks of the decade present absolutely: a teen flipping through a display lands on Patrick Swayze’s Dirty Dancing poster; a pair of metal chicks walks past a Tape World store; a standee of a young Vanna White advertises a sleeper sofa; a man in a cowboy hat sits against a cluster of payphones. Mallgoers are puffing on smokes. But as many images could just as easily be replicated today. An older couple descends down an escalator, and Christmas displays then look like Christmas displays now. The architecture – every brick and tile of it – is eerily familiar.

The quality of the photos themselves seems very much a product of the time. With a number of frames grainy, blurry and/or out of focus, these look like stills from a point-and-shoot camera at a time when compact pocket cameras (remember Le Clic?) were both novel and ubiquitous. Surely the negatives have degraded over time, and clarity suffers all the more when reproduced in a large format. These imperfections, left untouched, lend an Everyman’s lo-tech resonance to the images. Our memories probably look very similar. Not Instagram, but Instamatic. Candid shots of nothing special, nowhere special. As such, the reader’s engagement is more observational than deconstructive.

The drawback is that Malls Across America falls short when it comes to emotive content. But perhaps that’s a natural consequence – even an intentional one – of photographing the homogeneity of mall culture. And yet I linger on the final frame. A teen in Jams and high-tops is playing the arcade version of Ikari Warriors with a small child propped up on his knee. I don’t know if it’s the skewed take on caregiving or the glow of the Donkey Kong machine in the background, but the image warms me. For a long time, the criticism of mall culture was that it moved the site of congregation into a realm of materialist consumption. Malls Across America does work as a commentary on the modern circumstance of being together alone. At least some of the images, viewed in retrospect, cause me to wonder if there isn’t some underappreciated merit in being alone together.