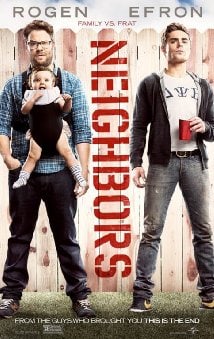 In Neighbors, director Nicholas Stoller (Forgetting Sarah Marshall) pits Rogen’s mild-mannered nebbish, Mac Radner, against his new neighbors: a house full of frat boys whose parties madden his wife, Kelly (Rose Byrne), and disrupt their baby’s sleep. Already dealing with the effects a new child can have on life, a group of obnoxious dickheads (led by Zac Efron) is the last thing Mac and Kelly can stomach. And while Neighbors is certainly filled with gross-out gags and the aforementioned penis jokes, the script isn’t as half-cocked as I’m making it sound.

Screenwriters Andrew J. Cohen and Brendan O’Brien could have easily allowed Neighbors to skate by on nothing more than a pastiche of scenes as Mac and Teddy (Efron) try to one-up each other in an escalating series of pranks. But the screenwriters wisely have the two men begin as friends before the shit hits the fan. In an attempt to appear cool, Mac and Kelly greet their new neighbors with the gift of a joint and even join the Delta Psi Betas in their first drug and alcohol-fueled bacchanalia. But the incessant noise gets to the couple and they break a covenant they made with Teddy by calling the cops. Thus, the war begins.

As I personally grapple with my life with a six-month-old baby, the opening scenes of Neighbors certainly hit home. Mac and Kelly don’t realize they are no longer cool, that part of their life has gone out of style. An impromptu invite to a rave has the couple scrambling to join in the fun, but they become laden with baby paraphernalia, eventually collapsing in the doorway under the weight of swings and breast pumps. They are desperate to be cool and the harder they try to impress Teddy and his friends, the more obvious it becomes that they have drifted off into suburban bliss and obliviousness.

But that’s okay. Mac and Kelly aren’t the only ones with tough realizations. Teddy is also suffering from his own blinders. As his brothers, including his vice president, Pete (Dave Franco), prepare for life after college, Teddy does not want to admit that only a few short weeks separate him from saying goodbye to the fraternity and hello to a trajectory that will likely lead him to an existence similar to the stiffs living next door.

It’s not so cut and dry. Mac and Kelly can be just as callow and ghoulish as the frat boys. Age doesn’t necessarily equate to grace and one of the joys of Neighbors is watching Kelly devolve from the mature half of the relationship to a frenzied mother bear determined to protect her young. Rogen isn’t the only one here who gets to be nasty and Byrne has to comic chops to match her more famous co-star.

Although I’m not buying the tacky denouement, Neighbors is a breezy, often profane comedy that is easy enough to like. It doesn’t push the envelope in the same way some of Rogen’s better films have, but Neighbors is easily the best frat comedy to come along since Revenge of the Nerds (1984). You don’t need to be the one to invite beer pong to still enjoy playing it from time to time.