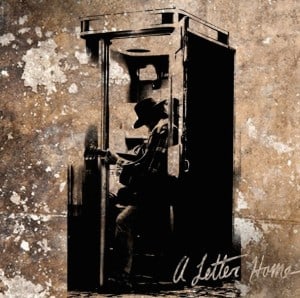 [xrr rating=2.0/5]At this stage in his vast and storied career, Neil Young is long past the point of caring whether you like his records or not. Uncle Neil is going to do whatever he wants, record the songs he wants in the way he wants. If you like it, great. If not, well, thanks for trying. Given his status as the pre-eminent rock and roll godfather still producing interesting work on a consistent basis, his legions of fans will give a chance to almost anything he releases.

Which brings us to A Letter Home, Neil’s latest curiosity, a collection of acoustic cover tunes played solo by Neil and recorded in Jack White’s low-tech, lo-fi Nashville studio. Using technology dating back to the 1940s (the Voice-O-Graph!), A Letter Home mimics the crackly, scratchy, warped sounds of your grandparent’s records—sounds that studio engineers have been striving to avoid for the past 60-odd years. Maybe this seemed like a good concept in theory. In execution, not so much.

The set list is fairly flawless: Bob Dylan’s “Girl From the North Country” is well suited to Young’s harmonica honking and wavering vocals, while Bruce Springsteen’s “My Hometown” carries a sadness that transfers effortlessly from Bruce’s New Jersey to Young’s Ontario. “Needle of Death” by Bert Jansch is effective too, a cautionary tale that evokes memories of Young’s own “The Needle and the Damage Done.”

“Since I Met You Baby” and “Reason to Believe” are both piano-based, while most of the other tunes are powered by Young’s straightforward guitar strumming. The musicianship here is basic, probably with the intent of focusing attention on the songcraft. This is all well and good, although it means that when Young’s performances falter, the songs collapse disastrously. This is especially true with the Willie Nelson standard “Crazy”—it’s tough for anyone to match up to the big-throated pipes of the original, and Neil just doesn’t have it it anymore, if he ever did. Similarly, Nelson’s “On the Road Again” is frankly painful to listen to. A bashed-out mess of piano and harp, Young never finds the melody and just croaks it out embarrassingly. Young has long been an advocate of spontaneity over polish, but Jesus, Neil, learn the fucking tune.

Young gets a lifetime pass for his brilliant 1970s albums—Everybody Knows This Is Nowhere, Zuma, On the Beach, Rust Never Sleeps—but his recent output has been shaky to say the least. This album is strictly for hardcore fans only, and moreover, for fans of “mellow Neil” rather than the rocking variety. I haven’t even mentioned the cringe-inducing spoken-word interludes in which Young phones home to “Mom” to talk about what he’s doing with his “friend Jack.” It’s kind of awful.

What makes Young great, of course, is that he doesn’t care what anyone thinks, least of all me. His endless creativity and inquisitiveness will always lead him down new roads, trying new approaches that will lead endlessly varied results. Of course, those result will be hit or miss. This is one of the misses.